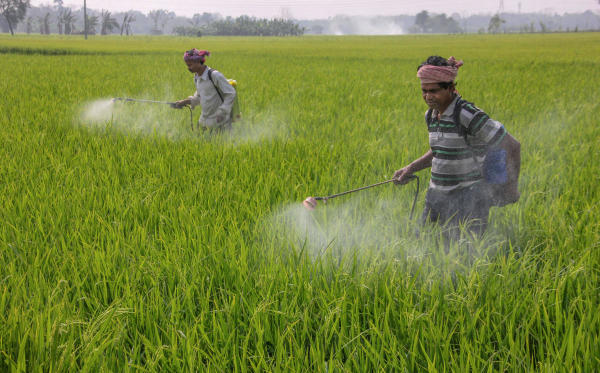 The Ministry of Agriculture and Farmers Welfare should put on hold the dra banning 27 pesticides in India, said Dr P Chowdappa, former Director of ICAR-CPCRI, Kasargod.

In a memorandum submitted to Sanjay Aggarwal, secretary, Department of Agriculture, Cooperation and Farmers Welfare, he said agriculture was passing through a diicult phase due to COVID-19 pandemic.

The proposed ban could increase the farmers’ expenses by two or three times.

Citing an example, he said the cost of the generic product like mancozeb and broad-spectrum multisite function fungicide is Rs 260 to Rs 300 per acre, compared to new generation molecule Iprovalicarb and Propineb combinations that cost Rs 2,000 per acre.

He said mancozeb was a component in several fungicide mixtures that were available. New generation agrochemicals are highly expensive and many are site-specific and pathogens may become resistant. Farmers may lose heavily unless substitute products are available at aordable prices, he said.

Chowdappa said the emergence of pest outbreaks may cause serious damage to the crops due to non-availability of pesticides listed in the proposed ban list.

The process of review should be science-based and consultative. He said the five major reasons for banning pesticides include endocrine disruption properties, ban in other countries, availability of alternative chemicals, ecotoxicity or toxicity to honey bee/aquatic organisms and additional data submission on bio-eicacy and toxicity.

Banning of a particular pesticide by certain countries based on some studies can be taken as a basis to ban in India and warrant required scientific data to substantiate the action, he said.