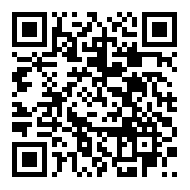 Rice leaffolder (RLF) or Cnaphalocrocis medialis (Lepidoptera: Pyralidae) is a migratory pest that damages rice crops. Adult RLFs generally inhabit the nearby grasses of paddy fields during the daytime, and they consume nectar or honeydew to obtain nutrition during the evenings and nights.

They also tend to move to paddy fields close to their nectar source plants to lay their eggs. The average number of eggs laid by a female adult RLF during its lifetime is approximately one hundred. The newly hatched RLF larvae initially bore into paddy spear leaves and the growing RLF larvae produce an adhesive substance to longitudinally roll rice leaf edges into tubes and eat the mesophyll, therefore, directly and seriously affecting the photosynthesis of rice leaves. This damage leads to a decline in rice weight, a rise in shriveled grains, a delay in the maturity period of rice, and, subsequently, reduced rice yields. In field tests involving kairomone bait formulations for controlling fall armyworm in 2019, Bioglobal, an innovation-driven company hat originated in Australia and is currently based in Shenzhen, China, unexpectedly discovered a special blend of kairomones that are very effective in attracting RFL. By taking advantages of its semiochemical, including kairomone, and technology platform, Bioglobal launched the first batch of field trials for RLF kairomone bait (″SemioLure-RLF″) in 2019. In this case, the term ″semiochemical″ refers to all natural and synthetic chemical compounds that modify insect behavior, including pheromones, parapheromones and kairomones. Suitable semiochemicals include those listed on ″The Pherobase-Database of pheromones and semiochemicals″ (http://www.pherobase.com). In this case, the term ″kairomone″ refers to naturally occurring and synthetic kairomones. A naturally occurring kairomone is an intraspecific semiochemical that is advantageous to a responding species, regardless of its function in the species from which it originated from. For example, a parasite may locate a host, predator or prey using a kairomone. A kairomone that is produced synthetically will elicit behavior similar to the one elicited by a natural kairomone. SemioLure-RLF is a tailored blend of synthetic kairomones that elicits RLFs to move towards the source of the bait to feed. This bait contains substrates that control and optimize the release of the odors of kairomone compounds in the rice field, and has a field life of six to eight weeks.

From July 2019 to September 2021, Bioglobal has been cooperating with the China National Agro-Technology Extension & Service Center to conduct a wide range of field tests of this new product in China’s main rice growing areas, including more than 50 sites in eight provinces. The main purpose of these field tests is to verify the effectiveness of SemioLure-RLF in monitoring RLF occurrence and population dynamics. The materials used in the trials were SemioLure-RLF, inverted funnel traps, and RLFs from open rice fields that were either naturally locally bred or had migrated.

Since RLF is a highly migratory pest, its migration time, path and landing on a particular area are unpredictable. Timely and precisely monitoring of its occurrence and population in a particular area is key to achieving effective control and reducing damage. Traditional monitoring methods include sex pheromone trapping, light trapping and field sweeping. SemioLure-RLF was assessed as an alternative or additional monitoring method, and was compared with the traditional methods in relevant field trials. The following charts illustrate some of the trial results: 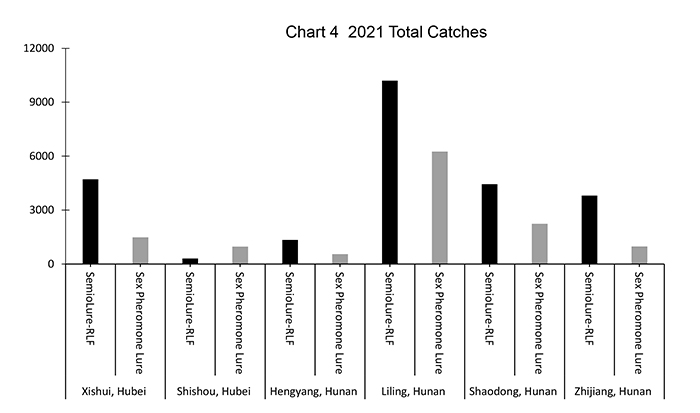 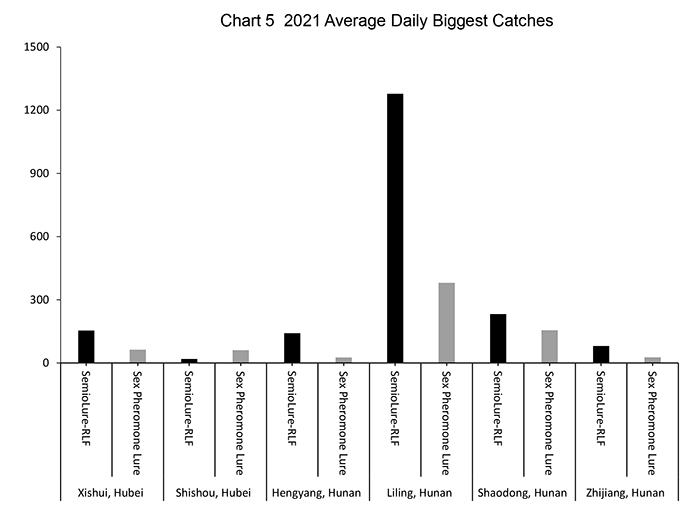 Chart 1 to 6: More RLFs were caught in traps with SemioLure-RLF than those trapped with sex pheromone lures in almost all trial locations. SemioLure-RLF is a powerful attractive formulation. 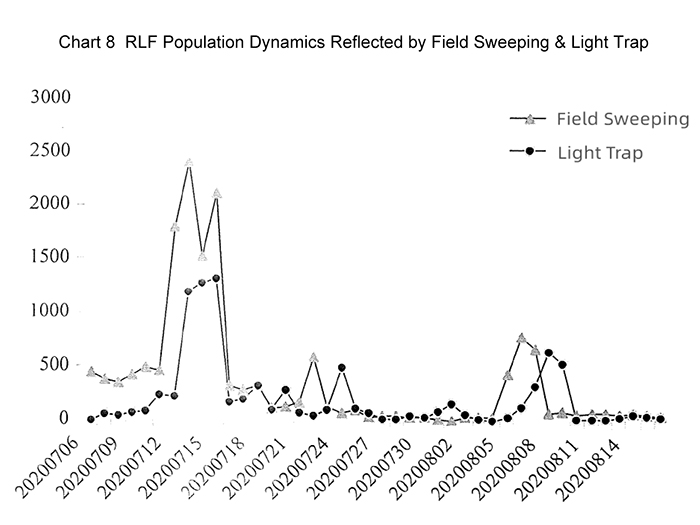 By comparing the population dynamics as shown in Charts 7, 8 and 9, it can be seen that SemioLure-RLF can match or even achieve more accurate monitoring results than existing monitoring methods. The field trials for SemioLure-RLF in other locations also produced the same or similar results, which were reported in Preliminary Application of Food Attractant Trapping in Monitoring Population Dynamics of Rice Leaf Folder, Cnaphalocrocis medinalis (Lepidoptera: Pyralidae) in China (Juan Zeng et al., Plant Protection, 2021). This publication concluded that trapping with ″food attractants″ are beneficial and promising in terms of monitoring practices. The advantages of simplicity, convenience, sensitive response, high specificity and the ability to trap both males and females offer a new method for precisely monitoring RLF population dynamics. 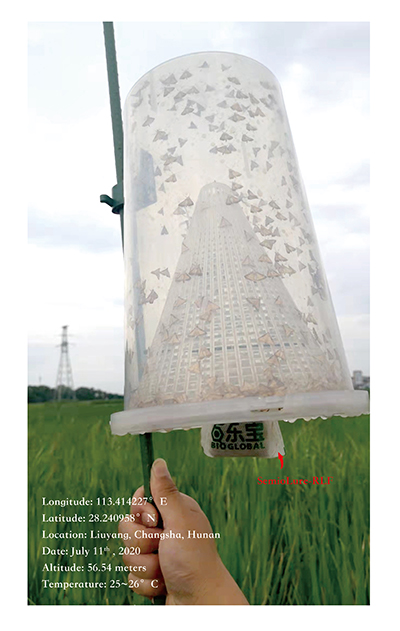 In 2022, further monitoring effectivity trials were carried out in 50 different county locations in seven Chinese provinces.

In order to assess the development stages of adult RLFs caught in the mentioned trials, large scale dissections were performed by entomologists from the Plant Protection Institute of the Chinese Academy of Agricultural Sciences. The dissection results showed that SemioLure-RLF is consistently very attractive in both the early and late stages of development of RLFs, although the percentage of younger and aging adults may vary in certain circumstances. For example, if the RLFs are mainly preexisting or emerging local populations, a higher percentage of those caught will be younger adults. In a particular location, a higher percentage of caught RLFs usually consisted of mostly migrating aging adults at late stage development. 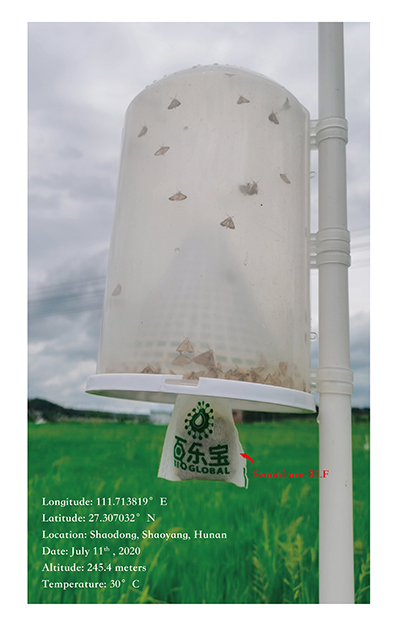 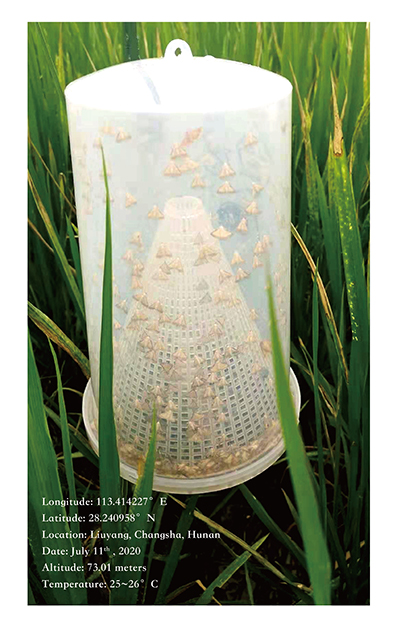 Bioglobal’s R&D team completed its gender classifications of RLFs to assess the level of effectiveness of SemioLure-RLF in attracting female RLFs and explore the product’s potential for controlling RLFs by removing the females, therefore, reducing the number of eggs they lay. The trial results shown in Charts 1 and 4 highlight the total amount of RLFs caught, with more than 50% of adults RLFs being females. The sex ratio between females and males ranges from 1.04:1 to 1.40:1. Eliminating a substantial quantity of the females population directly reduces the number of eggs laid.

Control trials in three provinces were conducted from 2021 to 2022. In these trials, quantities of 45, 75 and 135 SemioLure-RLF traps were installed in each hectare. The preliminary trial results indicate that installing 45 traps per hectare can achieve a good control level where middle level pest pressure existed. Peak catches per trap per night reached 1,500.

In view of the significant number of RLFs caught, especially younger females with field lifespans of four to eight weeks, SemioLure-RLF may be used as an alternative control method for chemical pesticide spray applications to control RLFs, as part of an IPM program and for organic rice farming.

This article was initially published in AgroPages' '2022 Biologicals Special' magazine.