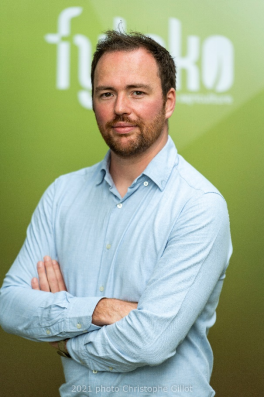 Countless temperature records broken, thousands of hectares consumed by wildfires, national infrastructure failing, and crops failing or yielding below par: the summer of 2022 will be remembered across Europe for the effects of the staggering heatwave enveloping the continent.

Climate scientists also hope it will be remembered as the year when people and industry finally took notice of their warnings of an emerging climate emergency and resolved to do something about it.

But bio-entrepreneurs Guillaume Wegria and Dr Juan Carlos Cabrera were already aware of the threat to agriculture posed by climate change. Their solution was to establish Fyteko: a committed climate-smart company, focused on the development of advanced plant bio-solutions.

″Agriculture must wake-up and green-up’,″ says Mr Wegria. ″This summer is just a foretaste of what we might be facing in the years ahead. We don’t know exactly how serious climate change is going to be for agriculture, but we need to be prepared for what’s coming.

″We also need to acknowledge that agriculture, while not the biggest culprit, is also contributing to greenhouse gas emissions.

″We need to make agriculture more responsible and more sustainable – to stop agriculture being part of the problem – and then get ourselves prepared for growing food in an uncertain climate and position agriculture as part of the solution.″

Mr Wegria says those steps must include moving away from a high-input, resource-dependent form of food production. Instead, he says farmers – and those who supply them and advise them – must start to deliver on better productivity and reduced environmental impact, including addressing concerns about nitrogen use and water efficiency.

But there’s also concern about how well we’ll be able to grow crops in the future. Climate change might bring more extreme weather events, new weather patterns and shifting seasons. Droughts might become more common and more severe – Italy being a prime example in 2022 – causing crops to struggle and even fail.

″Plants have evolved over many thousands of years into complex, intricate organisms controlled and regulated by sophisticated biochemical pathways, comprising hundreds of different bio-compounds. They’ve also evolved to survive. What’s their secret to dealing with abiotic stress?

″Just as the rainforest yields new pharmaceutical compounds, so too can plants offer us safe, smart and sustainable input solutions that provide an answer to our future crop production concerns,″ Mr Wegria enthuses.

It also turns on its head the conventional approach to plant protection: leading by laboratory. Mr Wegria says that going back to nature is the most exciting approach to crop production for decades.

Fyteko’s first commercial product is based on hydroxycinnamic acid oligomers. While this group of compounds – an essential constituent in plant cell walls – had been known for some time, Fyteko discovered their hidden talent as a signal molecule.

Signal molecules are used by plants to stimulate and control certain processes. In the case of the hydroxycinnamic acids, they appeared to ‘prime’ the crop against abiotic stresses, enabling it to withstand drought, flood, high temperatures and so on.

″In this way, they combine all the established attributes of the ‘agrochemical’ approach with the benefits of biologicals.″

Nurspray, a foliar product, and seed treatment Nurseed HC are the first products to market from Fyteko’s unique approach. Since the company was founded in 2014, it has invested generously in demonstrating the efficacy of its products across different crops, continents, and climates.

Nurspray has been subjected to 195 trials, each at least triplicated, in 23 countries and 25 crops. The figures below show its performance across three representative crops: maize, soybean and tomato. 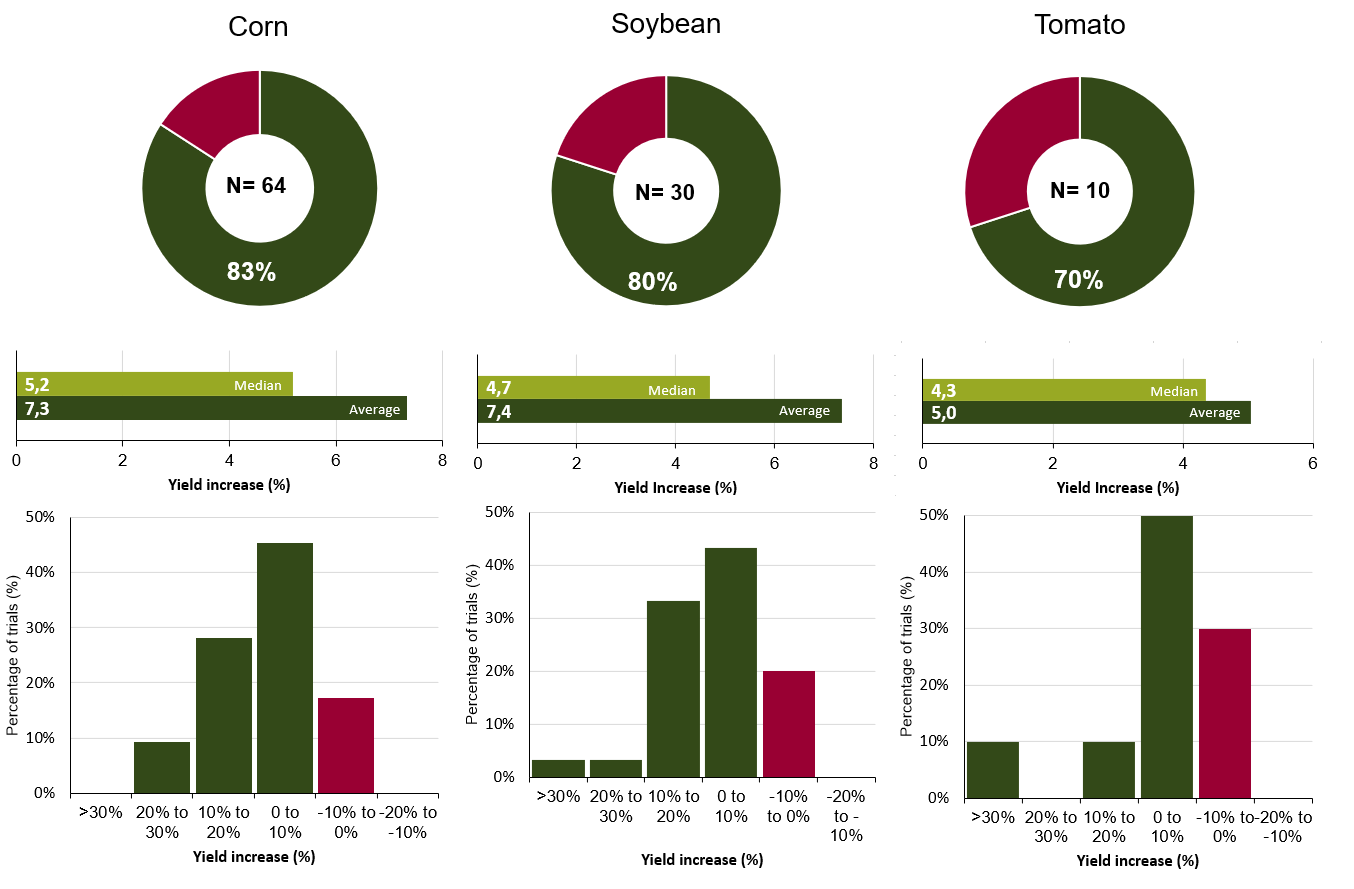 Figure 1.  Nurspray performance on three of the most represented crops in our efficacy trials: corn, soybean, tomato. N= number of trials.

″What’s been interesting is how Nurspray improves yields even in the absence of massive stress events,″ notes Mr Wegria, who suggests this could point to the existence of sub-clinical, asymptomatic stress in many crops – something that has previously gone unnoticed.

During 2021, Fyteko organized 11 trials across Europe to examine the effects of Nurspray on maize. Trial sites were selected for location and climatic conditions, results providing a valuable illustration of Nurspray’s true performance. They also helped Fyteko’s team understand the conditions necessary to unlock its full potential.

Trials followed the same protocol (Table 1), including a benchmark product (a well-known biostimulant based on glycine betaine (GB)) to allow comparison with established norms. Although their modes of action differ, both rely on osmo-protectant to mitigate abiotic stress. However, Nurspray induces production of internal osmo-protectant before stress; the benchmark (GB) comprises an internal cell osmo-protectant applied exogenously to the crop canopy. 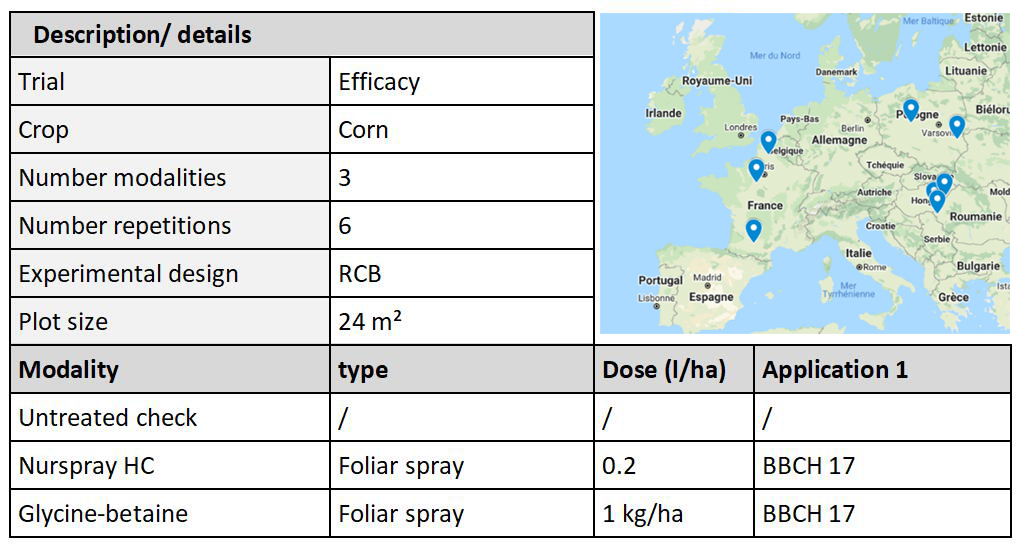 Results have been positive. All but one site showed yield increases ranging from 1.5% to 13%. Nurspray performed better than GB on average (4.8% for Nurspray, 2.8% for GB).

Nurseed HC has been the subject of 99 trials, each at least triplicated, with six crops in 16 countries. 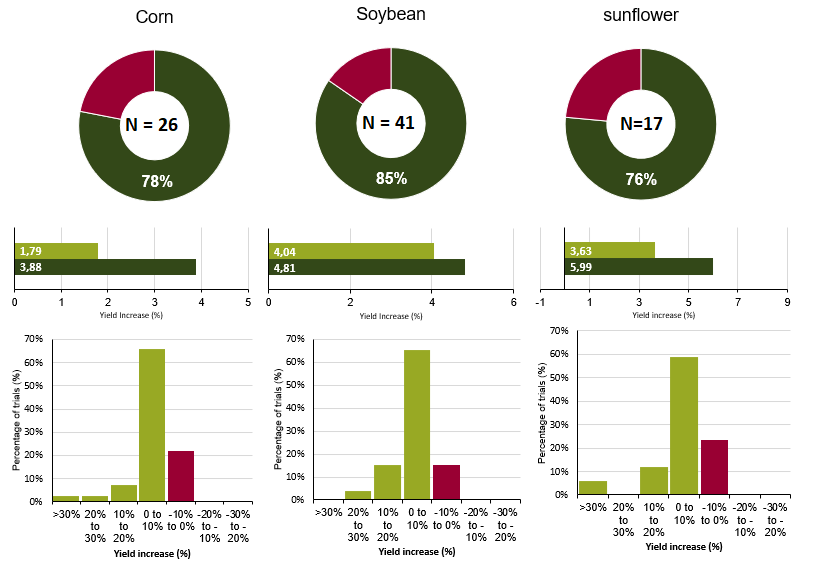 Ten soybean trials were organized to assess emergence, plant stands, and harvest yield of soybean treated with Nurseed HC. All seeds were commercially treated. Nurseed HC was incorporated in the slurry with other seed treatment products. Protocol detail is in the table below. 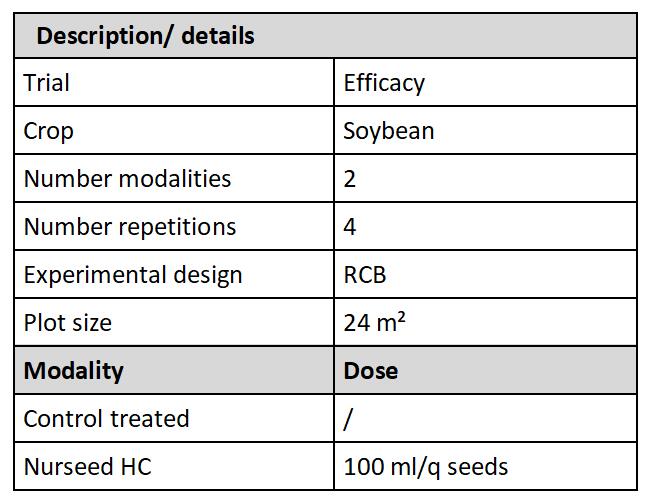 Figure 4. Plant stand increase compared to control in each location

Figure 5 is an emergence curve, based on the average of all 10 trials. Nurseed HC improves the emergence, compared to the control, early during the germination phase. The control seeds eventually catch up, but that’s against a lower plant stand for the control seeds across all trials. This proves that Nurseed HC provides an early-season boost to the crops, eventually translating into a higher end-of-season yield. Nurseed HC is a valuable addition to any seed treatment recipe, offering a boost to the seed’s germinative capacity and a shift in plant metabolism to prepare for stress events during critical early development stages. Its unique technology within the biostimulant sector – well-defined, pure active – Nurseed HC is fully compatible and stable in conjunction with all other seed treatment products in a slurry application.

″We’re thrilled with these results,″ says Mr Wegria. ″We’re the only company working to develop these novel, natural signal molecules; one of very few to develop biostimulants from a single, identifiable active substance.

″And it’s on the basis of these results that we’ve already secured not only registration across the EU27 and the United States, but also evaluation and distribution agreements with big names such as Sumi Agro, Janssen PMP, Cerience, Limagrain and Technisem.

″Our development pipeline is entirely biological, so Nurspray and Nurseed will be just the first.″