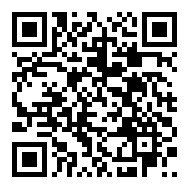 Borregaard is the world leading producer of lignin-based biopolymers, as sustainable alternatives to fossil based co-formulants. Our products have a documented low carbon footprint and can be used in products for organic farming. They have an excellent compatibility with most biologicals. Borregaard’s lignin-based biopolymers are the preferred option due to their robustness and ability to serve multiple functions in a wide variety of formulation types.

The first part of the graph, we have called cultivation phase of the life cycle. This part is referring to how the raw materials are being produced. Bio-based material like wood will take up CO2 from the atmosphere during their growth, giving a negative CO2 emission in this phase. Fossil material has a net zero during this step.

The next part in the graph is called production and is referring to the process of extracting and refining the final product. This process is demanding resources of various kinds such as energy, chemicals etc., thereby contributing to a certain environmental load for both the lignin-based and the synthetic dispersant. Borregaard has worked on optimizing its production process with regards to reducing emissions for many years, and this is visualized in the production stage. The CO2 emissions connected to produce 1 kg of lignin-based biopolymer is more than 30% lower than producing 1 kg of the synthetic dispersant.

The next phase is described as service life, and this the time in which the products’ functionality is being utilized by our customer. In this period, we have considered no emissions connected to neither of the products. This means that by using a lignin-based dispersant, the CO2 footprint is actually negative during its service life.

The last phase illustrated is the end of life. The illustrated data is a calculation of the CO2 released to the atmosphere if both the lignin-based dispersant and the synthetic dispersant is 100% degraded. This is not always the case. Several synthetic products have a poor biodegradability in nature, and this can lead to an accumulation of these chemicals in the environment. This can cause several problems, in particular to the ecosystem in which it ends up. Lignin-based biopolymers will have a slow degradation, similar to its starting material. Wood degrades slowly in nature, and the degradation goes through a series of phenolic compounds that are precursors to humic substances. Lignin-based polymers will be useful as a source of organic carbon for microorganisms and plant, instead of being an environmental challenge. 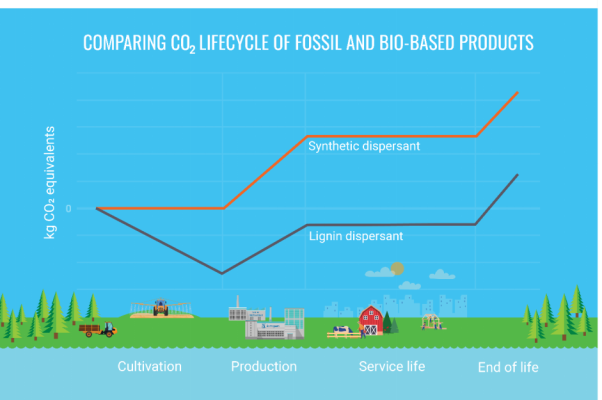 Figure 1 Comparison is carried out by the Norwegian Institute for Sustainability Research using life cycle analysis methodology according to the ISO-standards 14040/44. The model substance used as synthetic dispersant is polycarboxylate.

The microorganisms represent one gram positive bacteria, Bacillus thuringiensis and one gram negative bacteria, Pseudomonas fluorescens in addition to the two fungi Beuveria bassiana and Metarhizium anisopliae. Our product portfolio is consisting of lignin-based biopolymers with a very wide range of properties. Cation, pH, salt content, molecular weight and degree of sulfonation are a few of the key properties important for use in biological formulations. The selected products in the test below are representing a range of variety within these parameters.

The testing has been performed through a disk diffusion assay, using a 10% solution of the lignin-based biopolymers in the screening. The results of the compatibility testing can be seen in table 1. To summarize, no incompatibility was observed between any of the biopolymers in these four microorganisms tested. Similar testing has been performed on alternative fossil-based dispersants like naphthalene sulfonates, and it has revealed a lower degree of compatibility with the microorganism tested.

Borregaard lignin-based dispersants have been explored for UV-protection of biological pesticides since the 1990’s and also in other industries such as cosmetics and pigments. The chemical structure of lignin has a great potential for absorbing UV radiation and can also act as a sacrificial antioxidant. Different forms of chemical modification can also enhance this intrinsic property. Vanisperse CB is our most effective UV-absorber, and its UV-spectra is shown in Figure 2. The figure is also showing a lignin biopolymer based on a kraft extraction process, a naphthalene sulfonate and benzotriazole. Benzotriazole is a commonly used chemical for UV-protection. The figure clearly illustrates the high absorption potential of Vanisperse CB over a wide range of wavelengths, giving unique properties for UV-protection.

Borregaard’s lignin-based biopolymers have also proven to be able to complex with other polymeric structures such as proteins and peptides. The interactions are caused by the functional groups in the biopolymers, and Borregaard has an expertise in developing these functional groups into tailormade products with the desired functionality. When generating these complexes, the UV-protection potential has proven to be improved, most likely due to the lignin-based biopolymers proximity to the substrate in need of protection. This translates to the fact that in some cases the lignin-biopolymers ability to interact with the substrate is also critical for achieving optimal UV-protection. 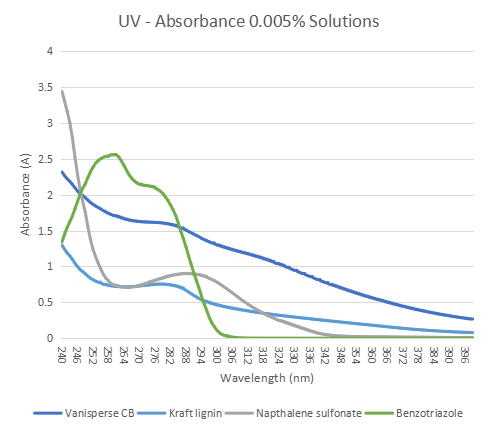 The agrochemical industry is responding to the need of more sustainable crop protection products with the exploding development within biocontrol formulations, and Borregaard’s lignin-based biopolymers are an important co-formulant to support this development both by its unique properties and its documented carbon footprint.