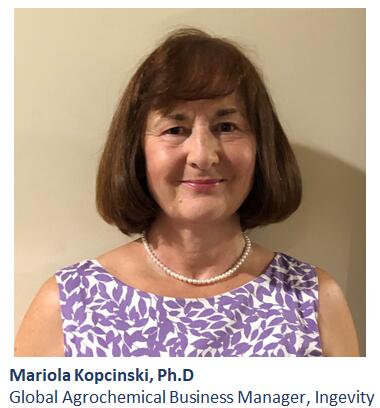 In recent years, increasingly stringent government regulations and growing consumer pressure to minimize the use of chemical pesticides have caused a shift in the agriculture industry toward more sustainable practices. Biological products, known as biopesticides, are derived from natural materials. They typically consist of two distinct categories: microbials and biochemicals. Microbial products originate from bacteria, fungi or viruses, while biochemical products are either of botanical or biochemical origin.

The current global biopesticide market is estimated to be worth $5 billion with an annual growth trajectory of 17%. North America and Europe represent over 65% of the biopesticides market, while Latin America has the fastest growth rate. Bioinsecticides make up almost 50% of that market and biofungicides more than 40%, while bionematicides and bioherbicides constitute a small portion. Interestingly, bionematicides for seed treatment application are the fastest growing portion of the global biopesticides market. Microbials represent the majority of biopesticides with nearly 60% of the total market.  The promising growth trajectory of the integrated pest management (IPM) approach in agriculture is expected to influence the future growth of biopesticides.

For more than 60 years, Bacillus thuringiensis (Bt) has been the most commonly used microbial product for lepidoptera and coleoptera biological crop protection. In many cases, naturally derived chemicals such as Spinosad, Spinetoram, Abamectin and Emamectin are added to biopesticides due to their natural origin and production process through fermentation. Beauveria bassiana, a fungus that grows in soils throughout the world and acts as a parasite on thrips, whiteflies, aphids, caterpillars, weevils, grasshoppers, ants, colorado potato beetle and mealybugs, is increasingly popular in the U.S., while Metarhizium anisopliae soil fungus, which acts as a parasitoid of sugar cane borer or locus, is gaining more momentum in Brazil.

Several botanicals or plant extracts are frequently used for thrips, white flies, aphis, mites, and nematodes treatments. Favored botanicals typically include natural pyrethrum extracts and neem oil (also called azadirachtin), but many more extracts can be used such as thyme, mint or garlic. Neem comes from the neem tree Azadiracta indica and is native to southern Asia. Neem products are based on aqueous or alcoholic extracts from seeds or cold-pressed neem seed oil. Neem oil and Neem oil soap products have proven to successfully control over 200 insect species including white flies, thrips, leafminers, caterpillars, aphids, scales, beetles, true bugs and mealybugs. Natural pyrethrum extracts are plant-derived insecticidal extracts and are produced in the flower heads of Tanacetum cinerariaefolium (previously named Chrysanthemum cinerariaefolium) and used for a wide range of insect and mite treatments. Synthetic versions are also broadly used in the crop protection market.

From Macroorganisms, the best known is Trichogramma spp., a macroorganisms discovered for codling moth control in 1916, which is a 1 mm sized wasp that parasitizes moth eggs and is known to control more than 200 moth and butterfly pest species, including the European corn borer.

Major global agrochemical companies use microbial products based on Bacillus spp. for disease control due to their abundance in the rhizosphere as the common endophytes of cotton, corn and grapes. Since Bacillus is easy to isolate and its spores are heat- and desiccation-resistant, it is less challenging to formulate when compared to other microbial products. Bacillus spp. are known for impacting plants’ production of auxins, gibberellins and cytokinins, enhancing plants through induced systemic resistance and treating various crop diseases. B. pumulis is used for powdery and downy mildew, rusts, bunts and sclerotinia, while B.subtilis is used for Botrytis, Alternaria and Phytophtora both in seed treatment and foliar applications.2  Another commonly used group of bacterial biofungicides is based on Pseudomonas chlororaphis, which is a primary ingredient in Howler, one of the newest biofungicides launched in the U.S.3

Trichoderma harzianum is one of the first biofungicides specifically designed to control common soil-borne diseases like Fusarium, Pythium, Rhizoctonia for a wide range of crops including corn, soybeans, potatoes, tomatoes, and cotton. Similarly, to Bacillus spp., Trichoderma spp. provides biostimulant activities in addition to biofungicidal activities, which enhance natural nonspecific resistance of the plants. Another commonly used biofungicide is Coniothyrium minitans, a mycoparasite of Sclerotinia sclerotiorum, recently developed as a commercial product for suppression of white mold in various crops including soybean, carrots, beans, cotton and many others.2

Although there is much smaller number of botanical products used for disease control than for the insect control, the most widely known is Milsana (Reynoutria sachalinensis). Milsana is a primary ingredient of Regalia biofungicide, a product used to treat powdery mildew, anthracnose, and bacterial diseases in the U.S. 4 Blad polypeptide technology, which contains Banda de Lupinus albus doce, comes from the lupine plant. Its multiple site mode of action controls fungal disease by fracturing the entire cell wall within four to eight hours of application.5

Another group of biopesticides are signal molecules, which stimulate natural nonspecific resistance of the plants. Harpins, proteinaceous elicitors of the plant defense reaction known as the hypersensitive response isolated from Erwinia amylovora, the bacterium that causes fire blight of pear, apple, and other rosaceous plants are the best known. Harpins are commercialized in the U.S. and Brazil for crops like soybean and sugar cane. 6 Several organic bioactive compounds, such as allicin, naringin, terpenes, laminarin, carrageenans, chitin and chitosan, showed activities against various plant pathogens in laboratory settings resulting in ongoing research to develop commercial products. 7

With the growing interest in biopesticides, most global agrochemical companies have invested into biopesticides through internal research or acquisitions of research startup companies. Subsidiaries of two Japanese companies: Valent Bioscience, owned by Sumitomo, and Certis, owned by Mitsui, are well-known examples. German company, Bayer, acquired AgraQuest and created a separate biopesticides division to support development of many new products and programs combining chemical and biological crop protection, while BASF purchased Becker Underwood and Bayer’s biologicals product lines to focus investment on biological seed treatment. Syngenta, a leading manufacturer, built several alliances in the biologicals space with companies like Novozymes, Agrinos, Isagro, and Marrone Bio, and acquired the Bioline macroorganism products and Pasteuria product line for nematodes control. Some of the most popular and fastest growing startups are AgBiome and Indigo Ag.  The strong interest from major chemical companies in the biopesticides space, combined with several new startups, promise rapid development of new biopesticides and their growing presence in future crop protection programs. Such programs will enhance current offerings and reduce the impact of resistance to chemistries, all while providing increased safety to the environment and consumers.