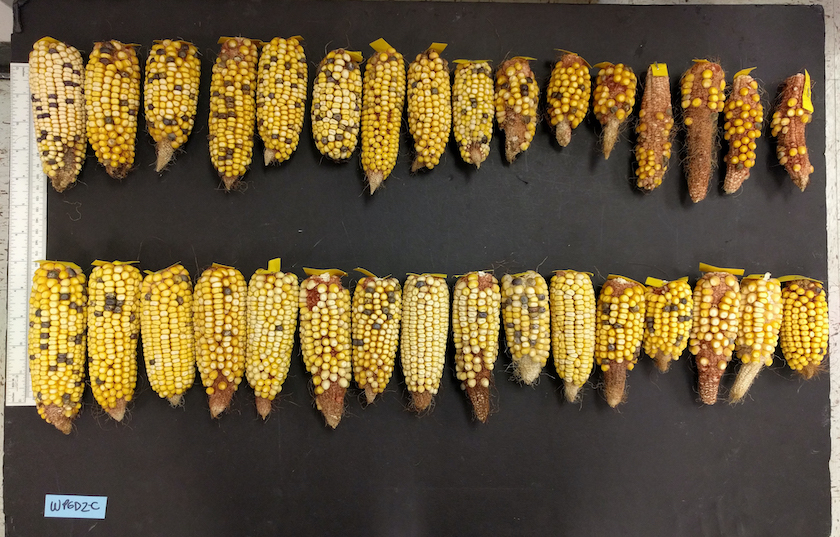 A new variety of corn, bottom, compared to a non-engineered variety, top. Both types were grown under warm nighttime temperatures, but the new variety had 40% greater yield. Photo by Camila Ribeiro

Corn thrives in hot, humid summers, but it needs cool nights to fill kernels. Climate change is causing nighttime temperatures across the corn belt to rise, robbing corn of its full yield potential.  Researchers at the University of Florida have engineered a plant that can handle the stress of that nighttime heat and produce dramatically increased yields.

University of Florida researchers used CRISPR technology to move a key protein within the plant to boost heat resistance.

“PGD3 isn’t the only enzyme in the cell that catalyzes its specific reaction. You also have PGD1 and PGD2. Unlike PGD3, 1 and 2 aren’t sensitive to heat, but they don’t operate in the part of the cell where PGD3 operates, the amyloplast, which is the part of the plant cell that produces starch,” said UF/IFAS professor Mark Settles. “We wanted to find a way to move 1 and 2 into the amyloplast. Once there, we predicted they would be able to help kernels grow at higher temperatures.”

The researchers note that the study will enable the development of new heat-resistant corn using traditional plant breeding.

“Our study is an example of how genetic engineering techniques can speed up traditional plant breeding processes by giving breeders insight into how genes confer desired traits. Climate change is happening fast, and we need to develop plants that will adapt to this new environment as soon as possible,” Settles said.