Russian biologists have studied strains of the plant pathogenic fungus Rhizoctonia solani, which causes diseases in potatoes and other plants. Among them, three particularly dangerous strains to be not susceptible to the common fungicide pencycuron and can survive at high temperatures. The results are published in the Journal of Plant Diseases and Protection. 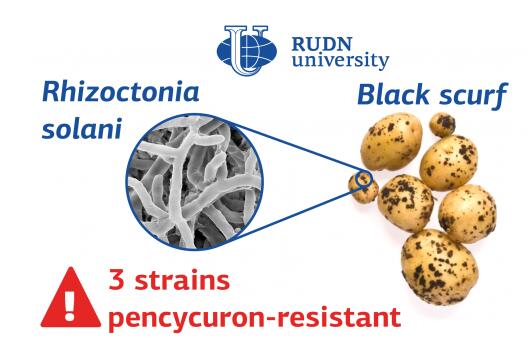 Rhizoctoniosis or black scab is one of the most common and harmful diseases of potatoes. It is caused by the fungus Rhizoctonia solani. It affects tubers, stems and roots of potatoes. It is difficult to control its spread since the fungus can survive in the soil on plant residues without a living plant. It can infect other crops, such as tobacco and tomatoes. There are no varieties resistant to Rhizoctonia solani, the prevention and treatment of black scab is carried out only with by pre-planting treatment of seed tubers with fungicides. The most common of them are pencycuron, thiabendazole, benzoic acid and fludioxonil. According to biochemical characteristics, Rhizoctonia solani is divided into 13 anastomotic groups (AG). Each has its own "menu" and its own sensitivity to fungicides. How exactly different anastomotic groups react to fungicides is a little-studied area.

"We analysed the composition of the anastomotic groups of R. solani strains from potato tubers grown in different regions of Russia and assessed their sensitivity to several widespread fungicides in Russia. For comparison, strains isolated from German and Australian seed tubers were analysed. Among the 53 strains studied, 49 belonged to the most common group on potatoes, the AG 3PT anastomotic group, two belonged to the AG 5 group, and two more belonged to AG K. The last two groups were discovered in Russia for the first time. The analysis of resistance to fungicides allowed for the first time in the world to detect 3 strains resistant to the popular fungicide pencycuron. Interestingly, the strains resistant to pencycuron were able to grow at high temperatures - more than +34℃. Also, at +34℃, AG K group strains isolated from potato stalks in the hot Astrakhan region grew," says Elena Chudinova, PhD, Associate Professor of the Agrobiotechnology Department of RUDN University.

"The study showed the presence of extremely dangerous isolates of R. solani, resistant to fungicides and capable of growing at high temperatures, and at the same time aggressive to potatoes. To prevent mass plant diseases, reduce crop losses and improve the quality of potato tubers, it is necessary to constantly monitor the appearance of dangerous strains of phytopathogenic fungi in the fields of Russian regions," notes Sergey Elansky, Doctor of Biological Sciences, Professor of the Agrobiotechnology Department of RUDN University.