Humanity's efforts to modify food plants is as old as farming itself, some 10,000 years. Before genetic engineering became possible, farmers have used simple selection inter- and intraspecies and crossing – for instance, today's strawberries are a cross between a strawberry species native to North America and a strawberry species native to South America. As biotechnologies progressed, more advanced techniques like somatic hybridization (cell fusion), somaclonal variation and mutation breeding were developed.

Genetic engineering began in 1973, when biochemists Herbert Boyer and Stanley Cohen developed genetic engineering by inserting DNA from one bacteria into another (read more about genetically modified organisms in this excellent primer by the FDA: Science and History of GMOs and Other Food Modification Processes).

The term genetic engineering describes a process in which a type of genetic modification is made to an organism's genome that involves an intended targeted change in a plant or animal gene sequence to effect a specific result through the use of DNA and, more recently, RNA technology.

Plant genetic engineering can rapidly and directionally improve the target traits of crops, break the bottleneck of conventional breeding, and achieve simultaneous improvement of crop quality and yield to meet human needs.

Due to the rapid development of nanotechnology in the past few decades, nanomaterials are widely used in nanobiology and gene therapy due to their small size, large surface area, biocompatibility, biodegradability, low toxicity, and low-immunogenic properties. The table below summarizes the key differences, the strengths and the limitations of different genetic transformation techniques: 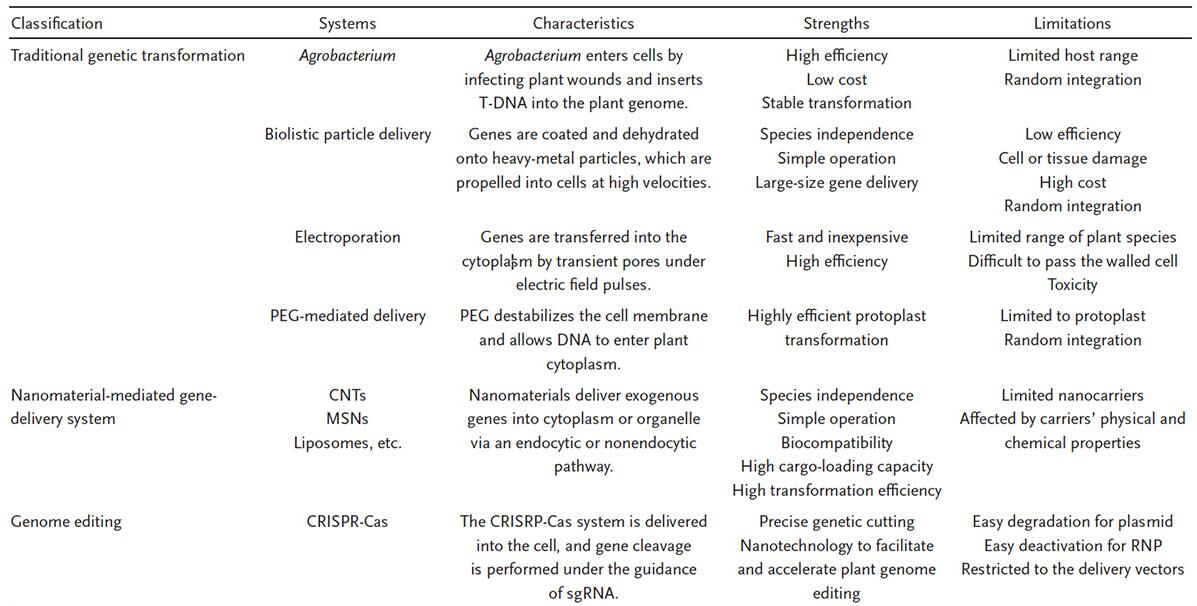 In recent years, breakthroughs in nanotechnology for genetic engineering have provided more favorable tools for the genetic transformation of plants. For instance, researchers have developed a technique, which uses nanoparticles to deliver genes into the chloroplasts of plant cells, and works with many different plant species, including spinach and other vegetables. In another study, carbon nanotubes enabled delivery of functional genetic material without DNA integration in mature plants.

Based on the characteristics of nanomaterials, a new review article ("Nanotechnology Strategies for Plant Genetic Engineering") by scientists at the School of Food and Biological Engineering at the Hefei University of Technology, summarizes the types of gene carriers used in plant genetic transformation, the ways of combining with foreign genes, and the differences and advantages compared with earlier traditional transgenic methods. 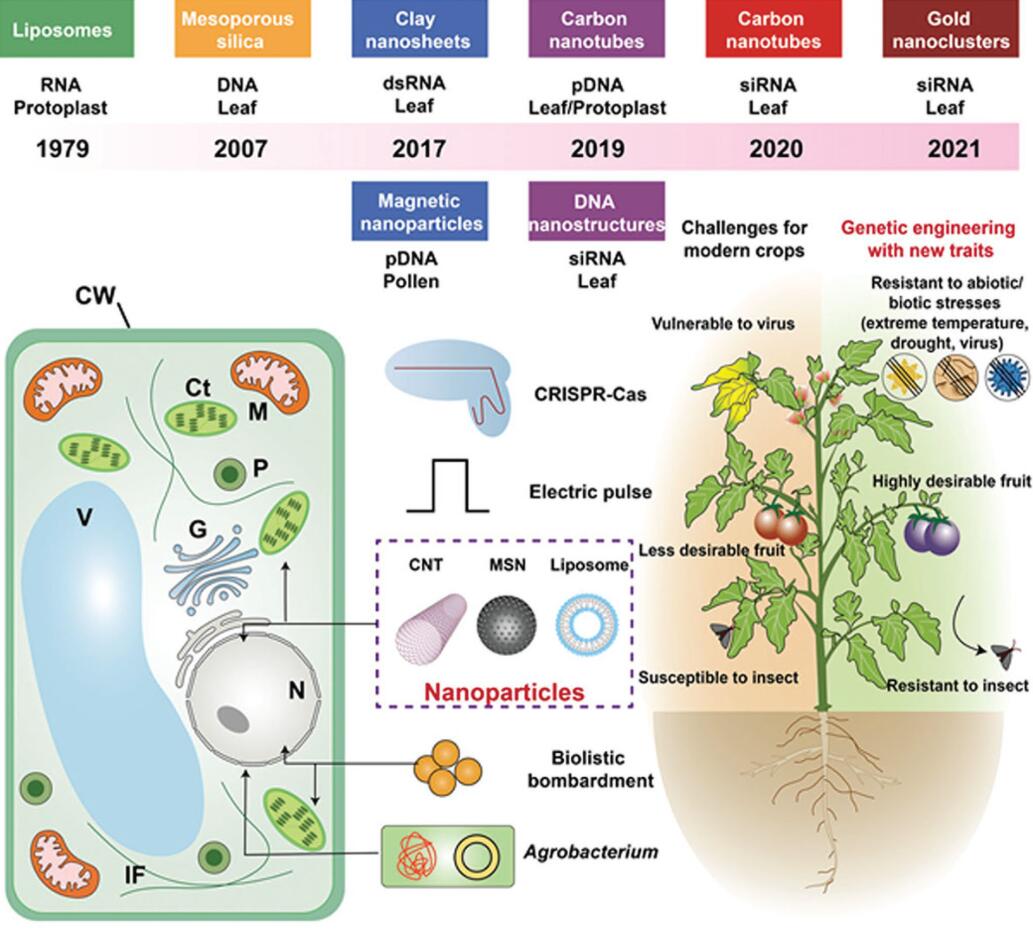 Compared to the traditional plant transformation methods, nanomaterial-mediated plant genetic transformation has the following advantages: it can pass through the plant cell wall passively without a power device; it can achieve large fragments of genes and multigenetic transformation by loading a large number of nucleic acids; it has no host restriction; it can protect exogenous nucleic acids, reduce the degradation rate of nucleic acids in cells and improve genetic transformation efficiency.
Most studies have suggested that the internalization efficiency of nanoparticles was positively correlated with genes being delivered. Most of these particles – such as quantum dots, nanoparticles, nanotubes, liposomes, DNA nanostructures – need to be less than 20 nm in at least one dimension. In addition, smaller nanomaterials have unique advantages which can achieve suborganelle localization (e.g., chloroplast, mitochondrion, nucleus). The use of various nanomaterials like carbon nanotubes, magnetic nanoparticles, and mesoporous silica nanoparticles for nucleic acid delivery in plant cells has been reported as proof of concept. 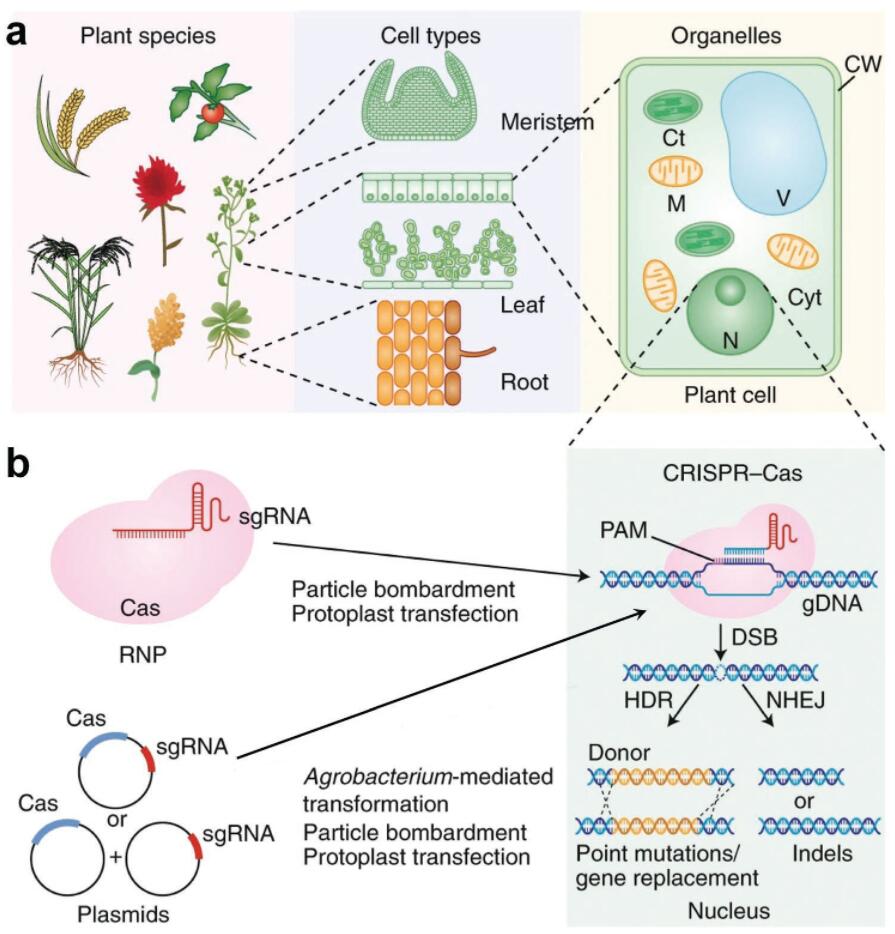 Delivery of CRISPR-Cas reagent to diverse plant species, cells, and organelles. a) Examples of plant species, cell types, and organelles that the CRISPR-Cas system can target. b) CRISPR-Cas elements can be delivered into the cells to perform genome editing. The Cas protein cleaves the DNA with the help of sgRNA. Once the double-stranded break (DSB) is generated, DNA repair mechanisms are triggered: HDR and NHEJ. Ct, chloroplast; Cyt, cytoplasm; CW, cell wall; sgRNA, single-guide RNA; gDNA, genomic DNA; M, mitochondrion; N, nucleus; V, vacuole. (Reprinted with permission by Wiley-VCH Verlag)

Concluding their review, the authors note that nanotechnology for plant genetic engineering is a novel emerging field where still many problems need to be solved; in particular:

"Thirdly, can nanomaterials effectively deliver CRISPR-Cas elements into plants? CRISPR-Cas enables precise genome editing, while it can be easily degraded (for DNA) or inactivated (for Cas protein) within plants. The use of nanomaterials to achieve organelle targeted delivery will further promote the development of plant genetic engineering.

Read the original article on Nanowerk.