Cao Bingwei's presentation has over 50 slides of fresh data and analysis, including:

Here we only show some part of the data. If you want to see all the content, please watch the full presentation video.

In 2020, including all manufacturers of pesticide formulations and technicals, the total output of China's pesticide industry reached 1.705 million tons, with a total sales revenue of RMB 220 billion RMB, of which 100 billion came from technicals.

When the COVID-19 broke out in early 2020, exports in the first quarter fell sharply especially in February, but after that month in March, April, May, and June, there was a large double-digit growth. September was stable, October increased, and November fell slightly. The decline in December was mainly due to the strengthened management of paraquat at the end of last year, which only allowed manufacturers to export, causing the fell of export volume. However, the current policy has been restored to allow trade companies to export, so the export data from January to August this year is good.

From January to August 2021, China's pesticide exports have reached 941,000 tons, accounting for 76% of production. Overall, the export volume increased by 1.15% in this period, but the value increased by 70%, which means that the value of pesticides soared this year. The price increase of bulk products represented by glyphosate has a great impact on the entire pesticide price index. Survey found that the increase of insecticide was not so high, the average increase is mainly pulling up by that of herbicides, and other varieties were relatively stable. 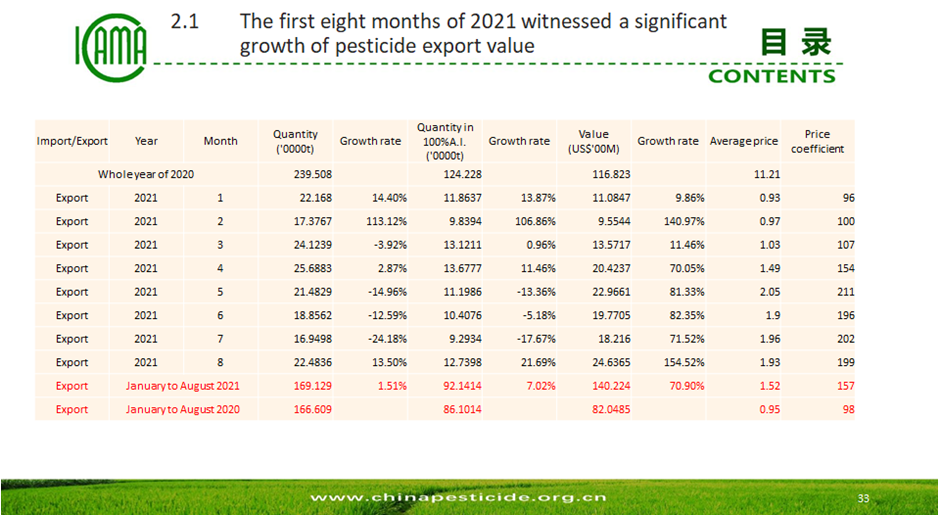 The structure of China pesticide export

From the perspective of formulation type, China's pesticide exports are mainly focused on technicals. In terms of value, technical export accounted for about 60% of the total export value. In recent years, the proportion of techincals in exports is declining, from 66% in 2011 to 58% in 2020. Therefore, the export structure of China's pesticides is being optimized. 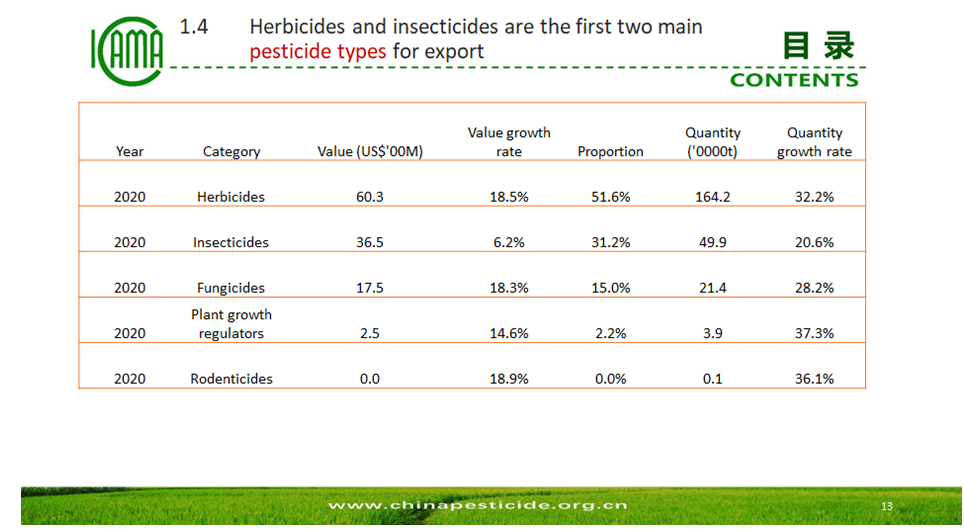 As for the top ten export destination countries, before the Sino-US trade war in 2019, the largest destination country has been the United States. After the trade war, Brazil became the top 1 destination.in 2020, the volume of exports to Brazil increased by 11% and the amount increased by 7%. . Exports to the United States in 2020 are better than in 2019, risen to the second position. The most obvious increase is Australia, to where exports have increased by more than 200% and the value has increased by 134%. In addition, India, Argentina, Indonesia, and Pakistan all have double-digit growth rates. Exports to Russia, Thailand, and Vietnam fell sharply. Vietnam was mainly affected by glyphosate, and its export volume dropped by nearly 40%, with its export value dropped by 25%. 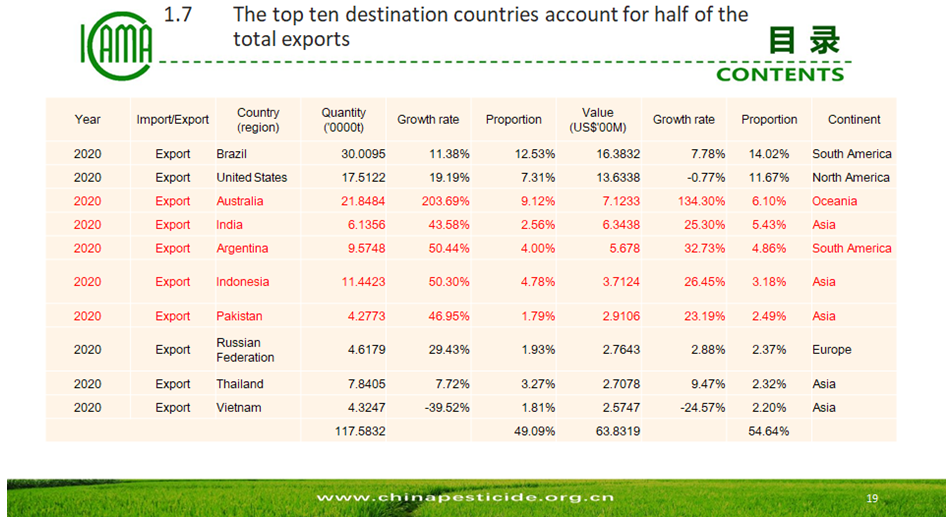 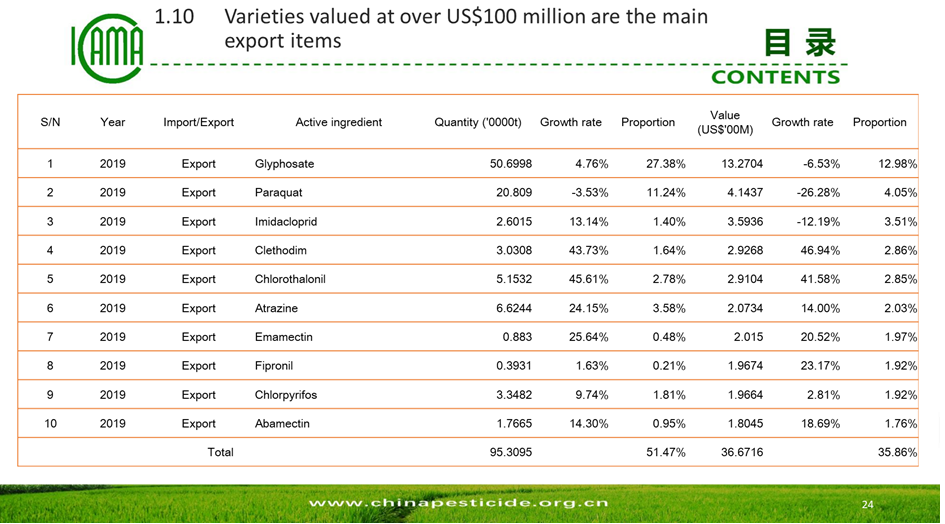 Policies and Measures Favorable to Exports

From 2019 to the present, China's pesticide exports have maintained a good growth trend. There are several main reasons: in the beginning of 2020, logistics was blocked in the country, and the State Council’s policy guarantees that agricultural materials can flow unimpeded. The second is the export tax rebate. For the first time, the tax rebate for pesticide formulations and technical has been leveled. The tax rebate is beneficial to the export structure of pesticides, and high-value-added formulations will grow under the promotion of the tax rebate policy.

In February, the MARA Department of Pesticide Management promptly restored the export management measures for pesticides only used overseas; in June, in order to implement the State Council’s reform requirements for “streamlining administration and delegating power, improving regulation, and upgrading services” and solve the bottleneck of pesticide export registration, the MARA timely introduced the registration policy for export-only pesticides (MARA Announcement No. 269 of 2020). These efforts have effectively promoted the growth of pesticide export trade.

Outlook of International Trade in Pesticides

1.China’s pesticide exports will continue to grow in the short term due to the complicated pandemic situation in India and other countries;

2.The export tax rebate policy functions to promote the restructuring of pesticide exports, which is conducive to the growth of exports of pesticide formulations;

3.The registration of export-only pesticides will become a new driving force for pesticide export growth;

4.With the signing of RCEP agreement as well as the formation of the China-Japan-Korea Free Trade Area in the future, Southeast Asia and Northeast Asia will become hot spots for pesticide exports;

5.With the mutual recognition of pesticide registration information in countries along the Belt and Road, Argentina, Egypt, Iran, Pakistan and other countries with agriculture taking a large part of their economy will also become regions contributing to the pesticide export growth.

If you have more questions regarding China's pesticide regulations, please leave the question under the presentation video page and interact with the expert Cao Bingwei.