India: Consumption of chemical pesticides is not reducing while the use of bio-pesticides increases gradually 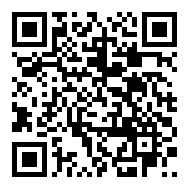 To ensure that agriculture production meets the increasing demand for food, pesticides are being widely used to protect crops from pests. While the availability of safe and efficacious pesticides and their judicious use by the farming community is critical to the long-term sustainability of agriculture, pesticides have also been identified as a key threat to the Sustainable Development Goals because of their potential to adversely affect the non-target species and the environment.

Pesticide consumption is also a topic of discussion in various global conferences related to sustainability and the environment. In COP 15 of the Convention on Bio-Diversity, the Indian Government expressed that a numerical global target for pesticide reduction is unnecessary and must be left to countries to decide since food security was important in developing states where agriculture is a primary economic driver for rural communities.

Consumption of chemical pesticide in India has increased over the decades

India being an agrarian economy, more than 40% of the workforce is employed in the sector thereby bringing the focus on agricultural development in the country’s planning and policy. India is among the leading producers and consumers of pesticides in Asia and the World. The consumption of pesticides in India increased several hundred folds from 154 MT in 1953-54 to 80,000 MT in 1994-95 with the Green Revolution being a major contributor. However, since then, the consumption steadily dropped to 54,135 MT in 1999-2000 because of the ban and restriction on the use of organochlorine pesticides and the introduction of the Integrated Pest Management programme. 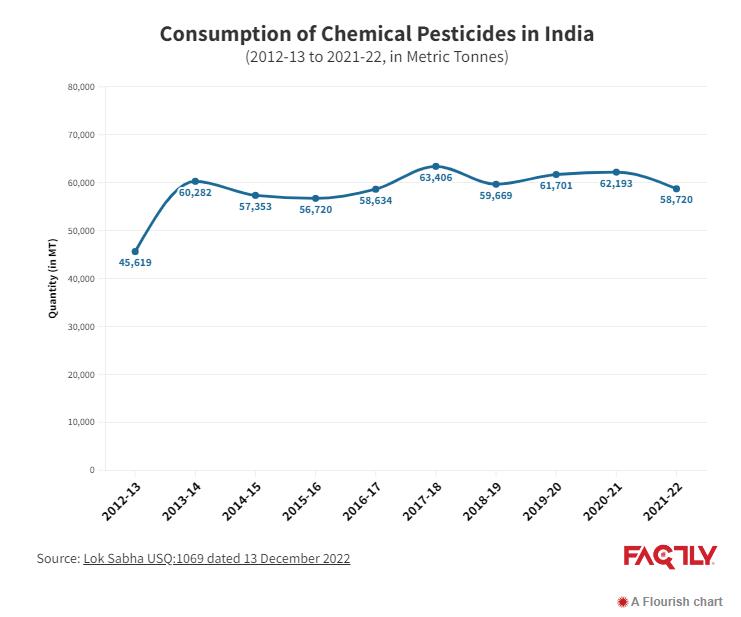 Among states, Maharashtra is the largest consumer of chemical pesticides followed by Uttar Pradesh. With more than 10,000 MT consumed by each of these states annually, the two states alone contributed to 38% to 42.4% of the total chemical pesticides consumed in the country every year since 2015-16. Punjab is the third highest consumer with an average of more than 5525 MT consumed from 2015-16 to 2020-21. Punjab’s data for 2021-22 is not yet available. The three states together contributed 48% to 51% of the total consumption during the six years from 2015-16 to 2020-21. 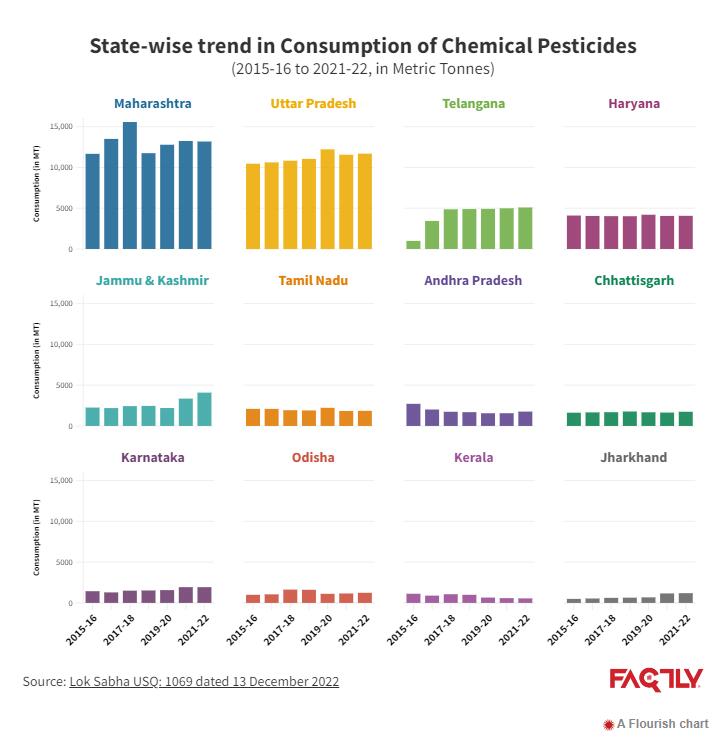 Consumption of bio-pesticides is increasing 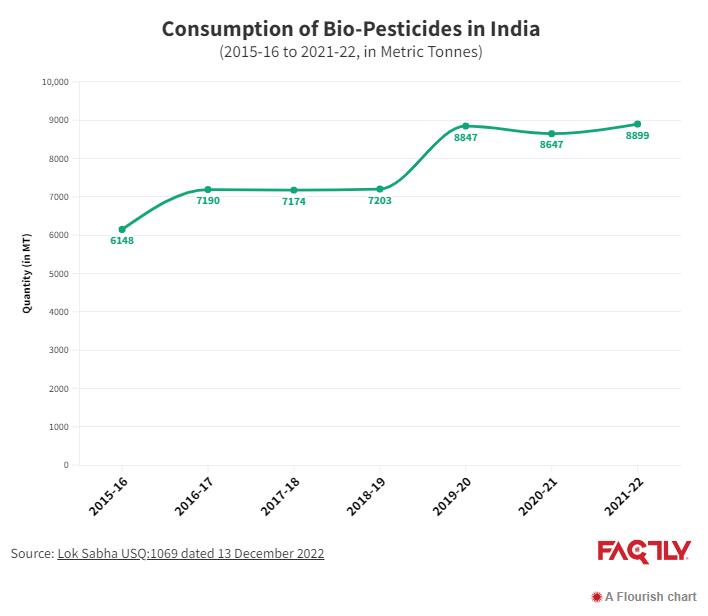 Maharashtra, Rajasthan, and West Bengal account for one-third of the bio-pesticides consumption in India

A significant increase was also witnessed in the states of Telangana, Tamil Nadu, and Chhattisgarh. Meanwhile, the states of Kerala and Odisha witnessed a decline in consumption in the last 3-4 years. Despite being one of the largest consumers of chemical pesticides, Uttar Pradesh’s consumption of bio-pesticides has been very low. The state reported having consumed only less than 50 MT until 2020-21 and 50.88 MT in 2021-22. Though the state has witnessed an increase in usage, Andhra Pradesh has also reported 45 MT in 2021-22. The consumption in these two states is among the lowest among large states. 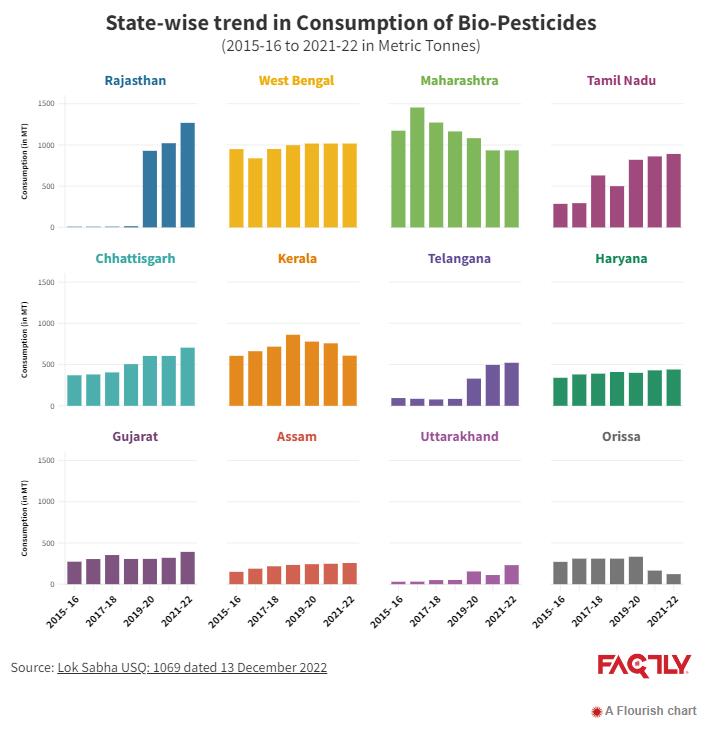 As per responses provided in the parliament, The central government promotes sustainable agriculture and encourages the use of biopesticides through organic farming schemes of Paramparagat Krishi Vikas Yojana (PKVY) and Mission Organic Value Chain Development for North Eastern Region (MOVCDNER). Educational programs are held for farmers to shift to eco-friendly products. ICAR and state agriculture universities are also working on developing biopesticides. To promote the judicious use of pesticides, Central and State Governments through their field agencies ensure that farmers are provided with the right knowledge/ information about recommended pesticide use. The Union Ministry of Agriculture and Farmers Welfare is also propagating the Integrated Pest Management approach through its 36 Central Integrated Pest Management Centres located in 28 States and 2 UTs. However, as observed earlier, the high usage of chemical pesticides continues in many states.

Source: FACTLY
Click to bookmark and build your agrochemical knowledge base
Print
ForwardShare