Towards A US$ 5 Trillion Economy: Opportunities for India’s Dynamic Agri-Food Sector 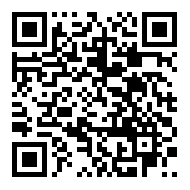 Agriculture sector is the backbone of India’s economy contributing to over 18% to the GDP and employing nearly a third of the workforce. The agri and allied sector contribute USD 400 billion to the Indian economy. Amid the gloom and doom of one of the biggest and unprecedented crises in the history of mankind - the Covid19 pandemic, India has yet again demonstrated its resilience and stature, which is evident from the progressive and forward-looking Budget 2022-23.

Sans populistic measures such as loan waivers, this could easily be termed one of the most unglamourous budgets the nation has ever seen. It has touched upon bringing together the key ingredients for a sustainable, tech-enabled, digitally driven, inclusive economic growth though there are some aspects that need more deliberation on their feasibility for example, promotion of zero budget natural farming.

However, from expanding the National Highway coverage by 25,000 km, allocation of Rs 60,000 crore on ″Nal se Jal″ scheme and to the proposed linking of five major rivers across various States, the budget certainly lays down the foundation for holistic socio-economic development, enhanced financial inclusion, supporting agriculture through improving irrigation coverage, bridging the Bharat – India divide through telecom innovations, and creating much-needed infrastructure (physical & digital) for efficient and faster movement of goods and people.

Credit flow for agriculture remains one of the most concerning issues and the target for the year 2021-22 was at Rs 16,50,000 crore along with Rs 2 lakh crore concessional credit boost to 2.5 crore farmers through Kisan Credit Cards (KCC) was on the anvil. There are significant takeaways for the agriculture and animal husbandry to strengthen food & nutritional security of the nation besides kicking off much needed action on impending climate change. While one may not be surprised about the continued emphasis on MSP, renewed focus on millets and oilseeds certainly sounds a positive shift away from the policy-driven crops (e.g., Wheat, Rice, Sugarcane).

Dawn of a ‘Millet revolution’

Millets are one of the most nutrition-dense foods and are excellent sources of a wide range of macro & micronutrients (Phosphorus, Magnesium, Folate, Iron), about 7-12% protein, 15-20% dietary fiber, and essential amino acids. A research study by ICRISAT on the nutritional benefits of millets have found that these ″smart foods″ can boost growth in children and adolescents by 26 – 39% when they replace rice in standard meals. The results suggest that millets can significantly contribute to overcoming malnutrition. So, these ‘Nutricereals’ must be given their due credits in augmenting nutritional security of the nation.

Unfortunately, even after the Green Revolution era, India’s food grain policies are heavily skewed towards and continue to favour a few crops such as paddy, wheat and sugarcane owing to various political and economic reasons. Consequently, crops like millets, which were once consumed heavily as mainstream food staples got marginalized without support in terms of MSP and/or procurement by the Govt. This has led to a huge public health crisis that is not noticeable to many but threatens the nation’s future in the context of burgeoning Non-Communicable Diseases like diabetes. India ranks second with nearly 77 million diabetic patients, a number that scares the medical fraternity as well as the policy makers. If made more affordable and attractive, millets, being one of the most suited foods for diabetics with their significantly low Glycemic Index, can play a huge role here. From the ecological conservation, and water security perspectives, millets cultivation requires relatively less amount of water as compared to many other crops. Sorghum, Pearl Millet and Finger Millet on an average consumer less than 25% of water requirement of sugarcane and banana, and 30% that of rice, (around 4000 litres of water to grow one kg of rice). Their vital role in fighting malnutrition and their enormous direct and indirect contribution towards achieving the SDGs 1, 2, 3, 6, 12, 13, and 15 must be recognized. The United Nations announced the year 2023 as the ″International Year of Millets″ to elevate their global status, and visibility as nutritious yet eco-friendly attributes to promote awareness among consumers globally. 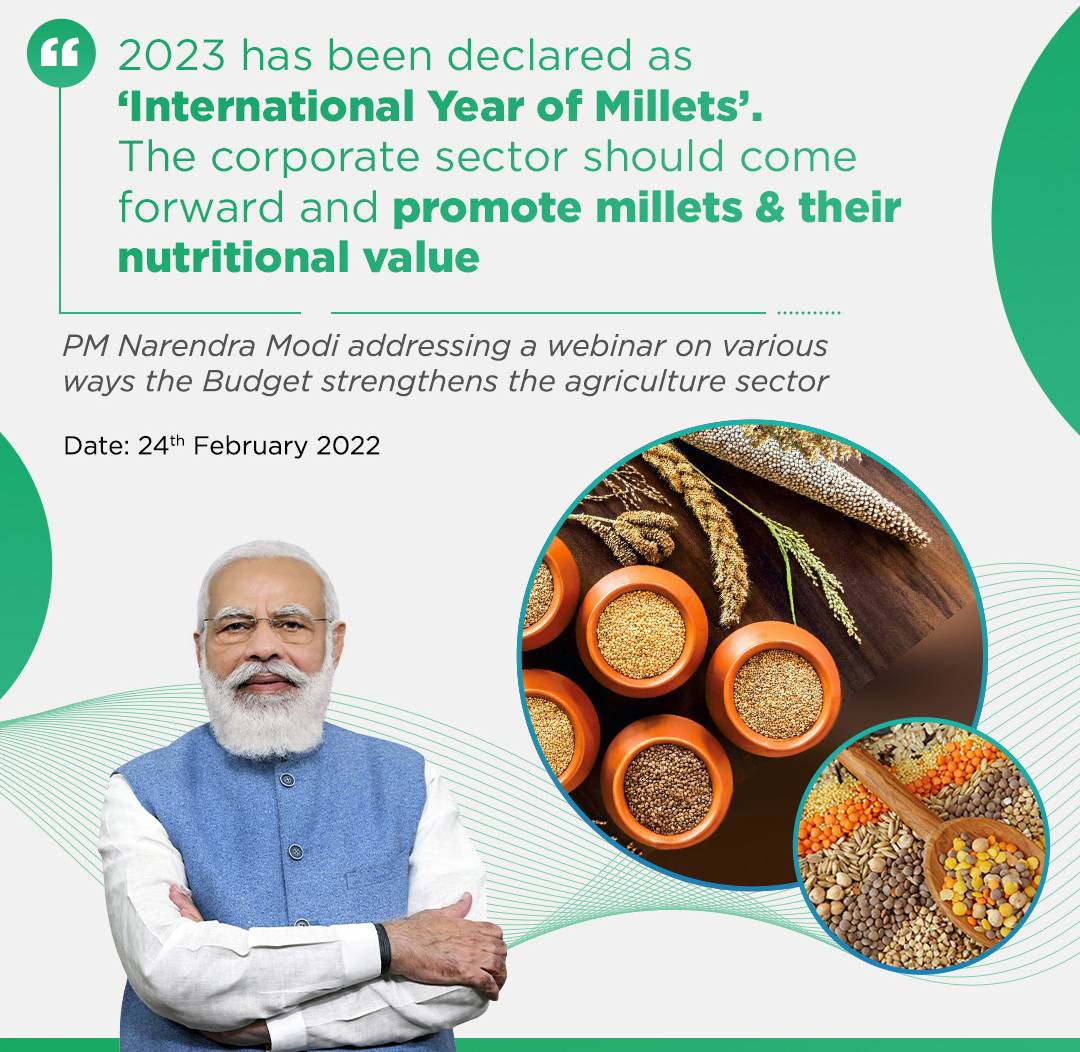 However, India’s millet area remains stagnant at 17 – 18 million ha with an average productivity of just around a ton per hectare. Millet farmers face huge challenges as these crops are usually cultivated in hilly tracts, and marginal lands with poor or no access to irrigation and where no other mainstream crops can be grown. Mostly these small and marginal farmers are stuck perennially in the vicious cycle of low input, low investment, low output, and low income. Their livelihoods hang perilously owing to their heavy dependence on subsistence, hand-to-mouth farming. Adding to their misery, they lack access to good quality, improved varieties, inputs, storage and processing facilities, and sell their produce usually without any value addition. They usually have poor or no access to formal marketing arrangements, and importantly, credit from formal institutional financial sources.

In this context, it is heartening to see the budget 2023 duly acknowledges their vital role in augmenting India’s food & nutritional security. But, to make the ‘Millet revolution’ successful, the announcement must be complemented with holistic support across the value chain as given below:

4) Fostering culinary innovations and NPD (New Product Development), which can be done through promoting entrepreneurship and nurturing start-ups

5) A conducive policy & regulatory framework is critical to realize the benefits in the long run, in terms of public health expenditure as people get healthy and prevent losses in human economic productivity due to illness (mainly, NDCs). These may include:

6) Creating wider awareness on the nutritional superiority of millets to enhance acceptance of millet-based foods among public.

7) Channelize funding for all the above activities through the ‘Climate-Smart, Green funding’ obligations including from private venture capital, HNI and philanthropic organizations. 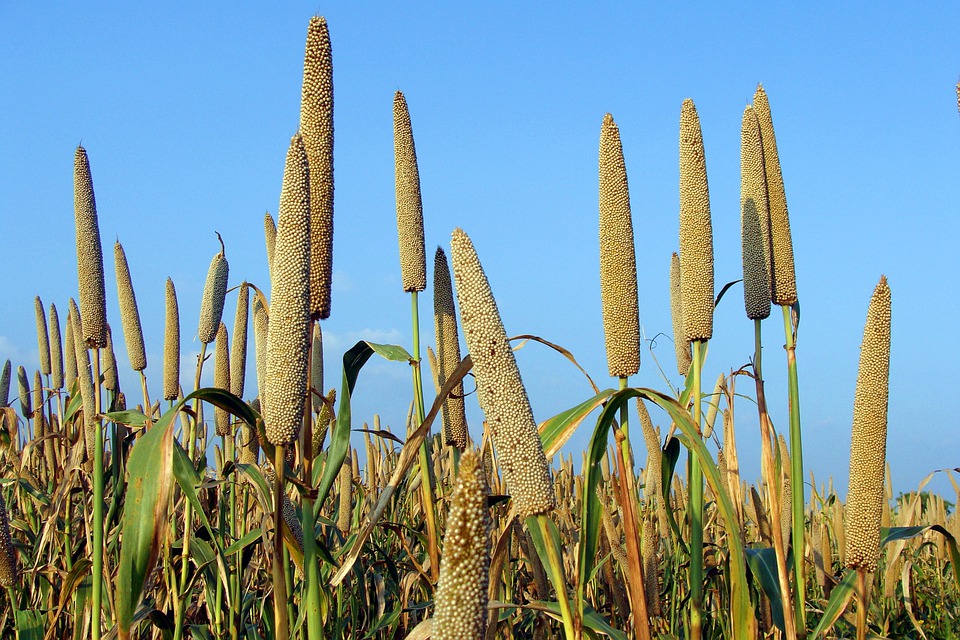 It was announced that the procurement of wheat in rabi 2021-22 and the estimated procurement of paddy in kharif 2021-22 will cover 1,208 lakh metric tonnes of wheat and paddy from 163 lakh farmers, and ₹2.37 lakh crore direct payment of MSP value to their accounts. While it is not surprising to see the continuance of MSP regime for these staple foods, it is high time the ‘cereal-focused’ food policies of the Green Revolution era are given a holistic review. This has been one of the key recommendations by NITI Aayog since several years. Despite decelerating annual growth in consumption of wheat and paddy since last 3 decades, sustained policy push on these crops is proving to be unjustifiable and mismatching with the consumption trends as consumers are moving towards more protein, oils, fruits & vegetables, and other processed, value-added foods.

Further, increased water stress and several associated negative environmental footprint of these crops particularly in the States like Punjab, Haryana, Uttar Pradesh, necessitate a hard look at the current policies. In addition, policies must focus on improving efficiency in the supply chain mechanisms especially on cutting huge (post-harvest and storage) wastage through involving private sector players. Overall, there should be a pragmatic shift in policy making to focus on nutritional security of the nation. Need of the hour - Boost for the domestic oilseed sector

Although per-capita availability of edible oils grew by 60 percent in the 3 decades since early 1980s, share of imports in catering to the country’s demand still stand at about 60 percent and the current import bill stands at US$10 billion per annum. Low productivity, limitations in expanding crop acreages, and farmers’ unwillingness to shift to oilseeds without assured marketing opportunities are just some of the tell-tale signs of chronic issues plaguing the industry since many decades.

It is indeed heartening to see a strategic plan may be introduced to give the sector its due attention. While more details are awaited, it is expected that the plan will incentivize domestic processing capacity, review the tariff structures for imported edible oil to boost domestic production besides taking a balanced and scientific perspective for introducing cropscience innovations that have proven global track record in increasing productivity of oilseeds. 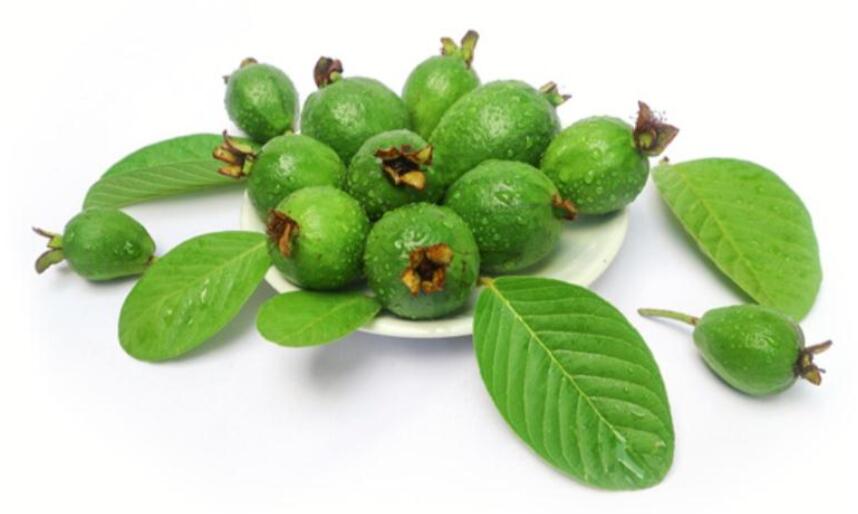 Globally, India stands second in terms of production of fruits and vegetables. It features among the top 2 in many crops. India ranks first in production of bananas, papaya and mango and guava. With growing incomes and affluence mainly among the middle-class households in India in the last two decades, demand for fruits and vegetables witnessed an impressive 4% CAGR. However, India’s share in global exports of horticulture products, is abysmally low at 2% and in many leading importing markets such as US, Germany, UK, and France, India’s share is less than 1.5%, according to TPCI (Trade Promotion Council of India).

The Union Budget 2022-23 seems to have taken cognizance of these issues and the Hon’ Minister of Finance mentioned about extending support to the States to adopt improved varieties and modern cultivation technology in fruits and vegetables sector. While it is an excellent decision to foster crop diversification away from traditional staple crops, focus must also be on the following: budgetary allocation and public investment towards R&D for improved varieties & hybrids; bringing more area under cultivation of fruits & vegetables through encouraging crop diversification; training and capacity building for farmers to adopt GAP (Good Agricultural Practices); improving farmers’ access to institutional credit; cutting wastage (both on-farm and post-harvest); increasing investments towards enhancing storage, processing and value addition (particularly, for exports); and promoting ‘Made in India’ products at prospective import markets etc., Further, with a conducive policy environment to promote domestic consumption by making fruits and vegetables more affordable and easily available, the twin objectives of enhancing nutritional security as well as increasing farmers’ incomes can be realized.

While these are easier said than done, a strong political will with a long-term vision is the critical need of the hour to ensure India’s demographic dividend (of having a larger share of young people) does not turn into a demographic disaster and the country remains firm on its growth trajectory.

This article was initially published in AgroPages' '2022 India Focus' magazine.