Africa has seen a substantial rise in the volume of venture capital flowing into the continent. While the majority of investments go to Africa’s surging fintech sector, agrifoodtech startups are also seeing a bump in investor interest.

Last year, $482.3 million was invested into the agrifoodtech industry in 2021, representing a 250% increase from 2020, according to AgFunder’s first Africa Agrifoodtech Investment Report, prepared in partnership with Dutch development bank FMO and British International Investment (BII).

This year is on pace to beat 2021, with agrifoodtech startups raising roughly $400 million in the first half of the year 2022.

Gains for the sector are positive, yet funding for agrifoodtech represents just 10% of all venture capital coming into Africa and less than 1% of global agrifoodtech VC.

Nigerian, Egyptian and Kenyan startups all tallied similar deal totals: 38 in Nigeria, 36 in Egypt and 32 in Kenya had 32.

Year-over-year deal count grew 50% in 2021, up from 99 in 2020 and 51 in 2017. Notably, 121 of the 150 deals were seed rounds, signifying the early-stage nature of Africa’s agrifoodtech sector. Egypt’s e-grocery and delivery platform Rabbit topped the seed funding chart with an $11 million round.

Series A investments notches just 16 deals, while there was only one small ″late-stage″ round, claimed by South African agrifood fintech company Nomanini, which has raised a large number of small venture rounds.

The sectors of interest for investors differ in Africa from global trends. Midstream Technologies, which support the movement of food and goods between farmers and consumers, raised $293.7 million or 61% of all African agrifoodtech VC.

Kenya’s Twiga Foods claimed the biggest funding round–$50 million in Series C funding–for a Midstream Tech company. The B2B platform was founded in 2014 to streamline fresh produce supply chains, delivering the produce from rural farmers to small and medium sized vendors and retailers. The company has since set up its own commercial farming unit called Twiga Fresh to ensure the supply of local food staples like onions. 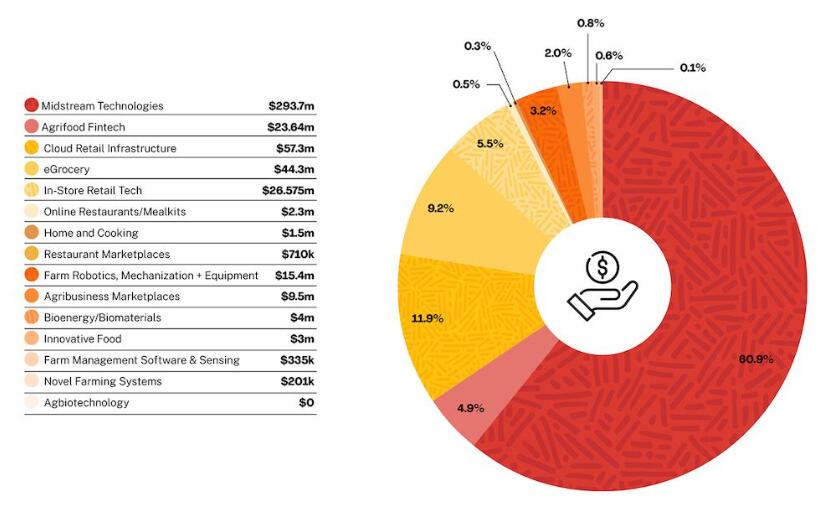 Egypt seems to be a hotspot for e-Grocery activity–the most popular agrifoodtech sector globally in 2021–with companies like Rabbit, Appetito and Breadfast all raising venture rounds last year.

A growing category to watch in Africa is Agrifood Fintech, which includes companies whose primary mission is to facilitate financial inclusion for farmers, agribusinesses, food vendors and retailers. Companies in the category raised $23.6 million last year.

″Investments that fit into well-defined categories in the U.S. and Europe are less clear cut in Africa, where supply chains are shorter, markets more nascent, and entrepreneurs’ success requires tackling numerous obstacles in the value chain simultaneously,″ we write in our introduction. ″We hope to shed light on the nuances of some these issues and leave readers with a sense of the agrifoodtech opportunity on the world’s youngest and fast-growing continent.″