On August 29, Hubei Xingfa Group Co., Ltd., released its 2022 semi-annual report, revealing that in the first half of 2022, the company attained an operating income of RMB17.299 billion, an increase of 74.45% year-on-year, achieving a net profit attributable to the parent company of RMB3.65 billion, which is an increase of 211.62% year-on-year, a historic record performance.

In the first half of the year, benefiting from the boom in the conventional agrochemical market and the rapid development of emerging industries, such as food processing, carbon fiber and integrated circuits, Xingfa’s products, such as phosphate ore, glyphosate, food additives, dimethyl sulfoxide and wet electronic chemicals, experienced strong market demand, which generated increased profitability. Xingfa Group managed to seize market opportunities, having scientifically organized its production and marketing through flexible strategies, which enabled it to achieve its record business performance.

According to the report, the Xingfa Group currently has a glyphosate capacity of 80,000 tons, and it also outsources glyphosate technicals for the production of formulations. Therefore, the annual sales volume converted to glyphosate technical has reached nearly 100,000 tons. In the first half of the year, the company’s sales of glyphosate series was 100,200 tons, valued at RMB6.1435502 billion.

Xingfa’s new material and energy industries are being developed step-by-step, and upon completion, these projects are expected to become the company’s new sources of profit growth. 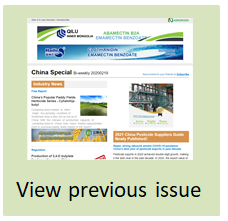