The Bayer Group achieved substantial growth in the second quarter of 2022. ″We delivered strong operational performance. In terms of sales, we posted significant gains at Crop Science and strong growth at Consumer Health, as well as a slight increase at Pharmaceuticals, too. And with EBITDA before special items, we even achieved growth of 30 percent,″ said Werner Baumann, Chairman of the Board of Management, on Thursday while presenting the company’s half-year financial report. ″In view of our good business performance and higher growth expectations, we have raised our full-year guidance,″ he explained.

Bayer does not currently see any material financial impact in 2022 from any potential gas supply bottlenecks as a result of the war in Ukraine, Baumann said. The company has taken steps to ensure that the direct impact of any potential gas shortages on its own production capabilities this year is contained to the greatest degree possible, he explained. ″From a technical perspective, we are well prepared to significantly reduce our reliance on natural gas by switching to alternative and renewable sources of energy. We have also launched programs to save energy and have built up our stocks of products where possible.″ A higher degree of uncertainty stems from the company’s indirect exposure via its global supplier network, Baumann said. ″That’s why we are expanding our network of suppliers and building up additional inventory of key raw materials and packaging materials.″

Bayer has taken an additional provision of 694 million euros in the second quarter mainly due to ongoing settlement negotiations with the State of Oregon. The settlement, when finalized, would resolve a pending environmental impairment case, involving legacy Monsanto PCB products, and result in the dismissal of the case. Given the unique challenges, trial procedures, and substantive law for this case in this Oregon venue, the company decided to pursue settlement, even though Monsanto voluntarily ceased production of PCBs in 1977 and never disposed of the chemical in this state. Bayer remains committed to defend future cases through the litigation process. Recently, a Delaware State Court dismissed all of the state’s claims in a similar PCB-related case alleging environmental impairments.

Monsanto has broad indemnity agreements with its former customers and the company will pursue its rights to recover costs associated with the PCB-related litigation. The company recently filed a complaint in the Circuit Court of St. Louis County for the State of Missouri to enforce its rights.

In the second quarter, net income amounted to minus 298 million euros (Q2 2021: minus 2.335 billion euros), while core earnings per share from continuing operations rose by 19.9 percent to 1.93 euros. 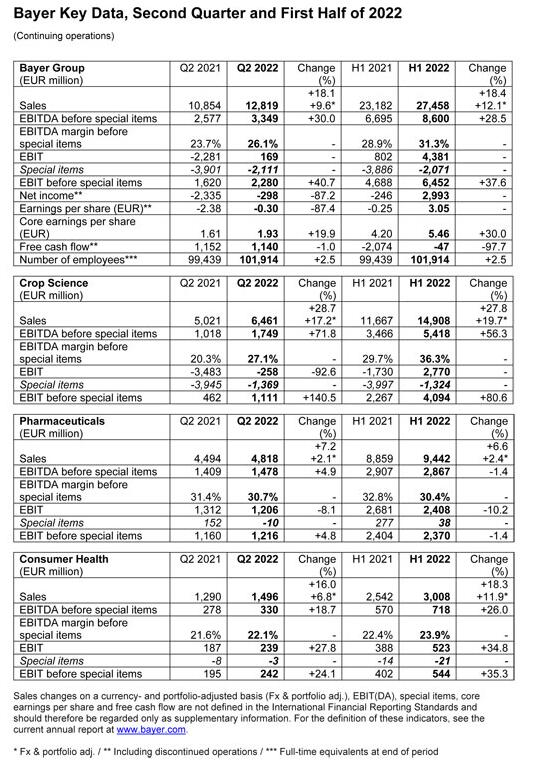 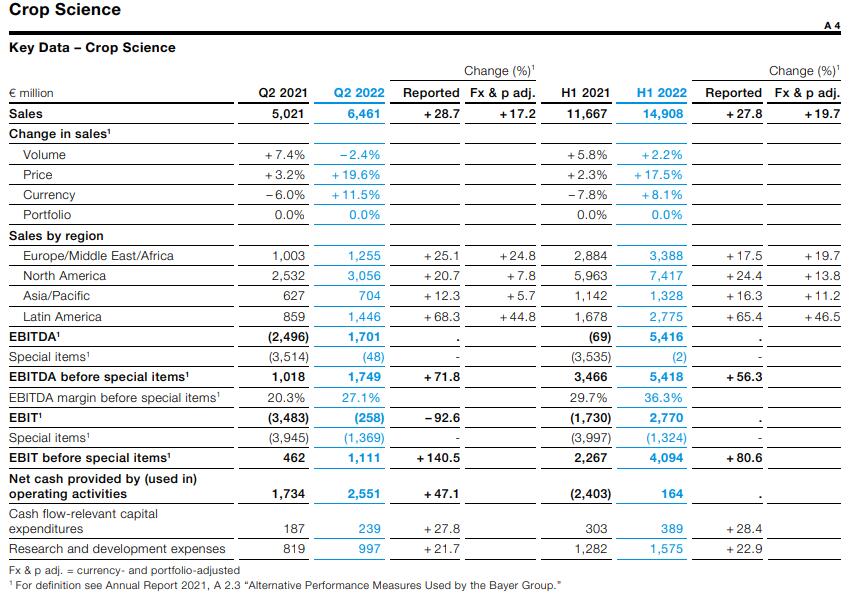 Crop Science posted a significant 17.2% rise in sales (Fx & portfolio adj.) to €6,461 million in the second quarter of 2022, driven by a substantial improvement in the market environment. Bayer recorded double-digit percentage growth in Latin America and Europe/Middle East/Africa, and also registered a strong expansion of business in North America and Asia/Pacific.

Sales at Corn Seed & Traits were up year on year, mainly due to price increases in North America, Europe/Middle East/Africa and Latin America. Bayer also benefited from expanded volumes in all regions except North America, where a decrease in planted acres led to a decline in volumes.

Herbicides posted considerable gains, especially in Latin and North America and in Europe/Middle East/Africa, as a result of prices for Bayer’s glyphosate-based products remaining high.

Sales at Fungicides advanced in all regions except North America, where volumes declined as a result of unfavorable weather conditions.

Soybean Seed & Traits saw a decline in sales, largely due to the significant reduction in sales from overproduction in North America as well as the withdrawal from the Argentinian market.

Sales at Insecticides rose year on year, mainly due to the launch of Bayer’s new product Movento™ in Europe/Middle East/Africa and expanded volumes in Latin America. The business in North America was negatively impacted by shifts in demand into the previous year.

Sales at Environmental Science came in at the prior-year level. Bayer further increased sales in Latin America due to price increases but recorded a decline in volumes in North America.

Vegetable Seeds registered double-digit growth in all regions, with significant gains in Europe/Middle East/Africa in particular thanks to advance demand.

Bayer recorded an increase in sales in the reporting unit ″Other″, driven by the growth of Bayer’s cotton seed business in North and Latin America.

EBITDA before special items at Crop Science increased to €1,749 million in the second quarter (Q2 2021: €1,018 million), mainly driven by the substantial improvement in business performance. Bayer also benefited from contributions from ongoing efficiency programs. By contrast, earnings were diminished by an increase in costs, particularly in the cost of goods sold, which was mainly due to high inflation. Bayer recorded a positive currency effect of €215 million (Q2 2021: minus €111 million). The EBITDA margin before special items increased by 6.8 percentage points to 27.1%.

EBIT came in at minus €258 million (Q2 2021: minus €3,483 million) after special charges of €1,369 million (Q2 2021: €3,945 million). These special charges mainly comprised impairments arising from an increase in the cost of capital in the cash-generating units Vegetable Seeds (€269 million) and Corn Seed & Traits (€202 million), as well as in the cash-generating unit cotton seed (€851 million), where updated business expectations were also a factor.

Sales at Crop Science increased by 19.7% (Fx & portfolio adj.) to €14,908 million in the first six months of 2022, with double-digit growth recorded across all regions. Corn Seed & Traits reported an increase in sales, largely as a result of higher prices. Bayer also benefited from expanded volumes in all regions except North America, where a decrease in planted acres led to a decline in volumes. Sales at Herbicides rose significantly in all regions, mainly due to prices for Bayer’s glyphosate-based products remaining high. Fungicides achieved a further expansion of business in Latin America, Europe/Middle East/Africa and Asia/Pacific thanks to an increase in volumes, but posted a decline in North America due to lower volumes. Sales at Soybean Seed & Traits were down due to lower volumes in North and Latin America. Sales at Insecticides rose in Latin America and Europe/Middle East/Africa, largely due to an increase in volumes, but declined in North America as a result of lower volumes. Sales at Environmental Science and Vegetable Seeds increased in all regions. Within the reporting unit ″Other,″ the cotton seed business performed particularly well, especially in North and Latin America.

EBITDA before special items at Crop Science rose by 56.3% to €5,418 million in the first half of 2022 (H1 2021: €3,466 million), mainly due to the substantial improvement in business performance. Bayer also benefited from higher volumes, as well as contributions from ongoing efficiency programs. As in the second quarter, earnings were diminished by a mainly inflation-related increase in the cost of goods sold. In addition, there was a positive currency effect of €313 million (H1 2021: minus €363 million). The EBITDA margin before special items advanced to 36.3%, with currency effects having a dilutive effect of 0.2 percentage points.

In April, Bayer announced the expansion of its strategic partnership with Ginkgo Bioworks. Under the agreement, the U.S. biotech company will acquire Bayer’s West Sacramento Biologics Research & Development (R&D) site and internal discovery and lead optimization platform. The transaction will also bring the nitrogen-fixing technologies of the joint venture Joyn Bio to Bayer. Ginkgo Bioworks will become a multi-year strategic partner in the work to develop biological solutions in fields like nitrogen optimization, carbon sequestration and next-generation crop protection. The transaction will enable us to expand Bayer’s leading biologicals position, strengthen the company’s access to key enabling technology in synthetic biology, and maintain Bayer’s role as the preferred research, development and commercial partner in the biologics segment.

Bayer has also made important progress in a major ESG rating: MSCI ESG Research recently updated their ESG Controversies Report and lifted the red flag related to ″environmental concerns over GMO crops″ as well as their related allegation of a breach of the UN Global Compact Principles. This marks another important milestone in improving Bayer’s ESG rating profile.