Fertiliser and food prices could be high for years 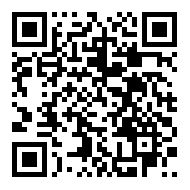 High demand and many supply interruptions have pushed fertiliser prices to record levels and the disruption will persist.

Russia and Belarus supply more than 20% of the world’s fertilisers, in a market that was extremely tight even before the Ukraine conflict last month. Fertiliser is crucial to agricultural output and global demand for it rose by 6.3% in 2021. This, combined with supply disruptions, took prices 78.6% higher year-on-year in 2021, according to the IMF. After the conflict, fertiliser prices soared to record highs. Tighter Western sanctions on Belarusian fertiliser producers last month have heightened the supply-side risks.

The fertiliser market imbalance, like that in the semiconductor chip market, will last well beyond this year. Persistently higher fertiliser prices will reduce usage and thus lower crop yields into 2023. This will increase poverty and food insecurity, and dampen GDP growth and living standards. Supply will fall faster than demand for fertiliser in 2022/23, keeping prices high and prompting self-sufficiency drives and supply chain changes. This may increase intra-regional trade in fertiliser. 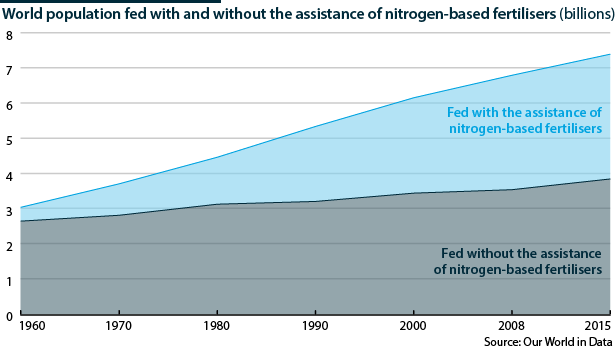 N-based fertiliser, which accounts for roughly 55% of consumption, increases plant growth and must be applied every year. P- and K-based fertiliser increase crop quality. The three nutrients are mostly used in combination.

In the last few years, several factors have boosted demand: 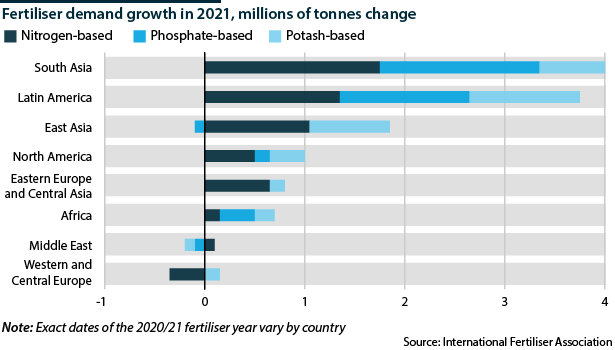 Late last year the IFA responded to historically high prices by revising its forecast for fertiliser demand in 2021/22. It had forecast 2021/22 growth of 0.9% in August, but the price shock prompted it to downgrade this in November to a contraction of 2.7%, due largely to reduced affordability.

The high prices in late 2021 were partly a consequence of supply-side strains that had built up since 2020:

Belarus accounted for around 20% of global potash-based (K) fertiliser exports in 2019 and 2020. In October 2020 Western states applied sanctions on Belarus.The potash sector was initially little affected, but over the last year year multiple sanctions have been applied to fertiliser:

Fertiliser prices, already high coming into 2022, have soared since the conflict in Ukraine. Western sanctions do not directly apply to Russian fertiliser firms. Nonetheless, supplies will be disrupted as Western traders try to avoid Russian supplies and shippers worry about costs, safety and insurance on the Black Sea route.

Until now, Russia accounted for a double-digit global share of each of the N-, P-, K-based and NPK (mixture) fertiliser markets. It was the world's largest exporter of fertiliser, earning USD7bn annually, and the only one of the largest exporters to be self-sufficient in every fertiliser.

Russia's trade ministry recommended this month that producers temporarily halt fertiliser exports because of new risks associated with foreign logistical companies. Whether they comply or not, supply is likely to be disrupted due to economic dislocation affecting production and seaborne exports.

Canada accounted for 36% of K-based fertiliser exports in 2020 and is raising its potash output this year to be in a position to fill some of the market gaps. It imports NPK fertiliser and balances out in N-based fertiliser trade.

The United States is the fourth-largest fertiliser exporter, but runs a fertiliser trade deficit overall. It runs a surplus in NPK-based fertiliser but a deficit in N- and K- based fertiliser. It is likely to import more from Canada. 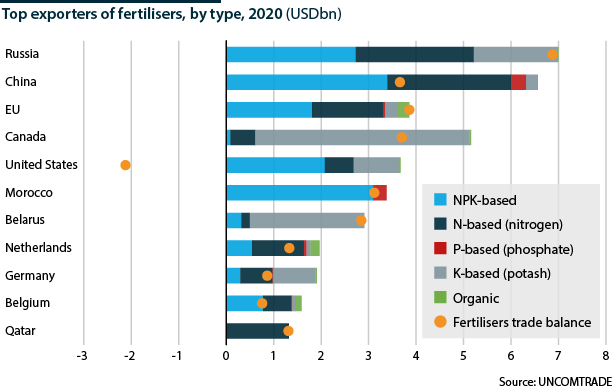 Brazil and India are the largest net importers of fertiliser. Longer-term, farmers worldwide will look to produce more domestically or change suppliers but in the short term, they will consider using less fertiliser or planting less crops, thus reducing yields.

Smaller economies will suffer more than major economies. In South Africa, fertiliser makes up 35% of farmers' input costs and this share is likely higher in some other African countries. 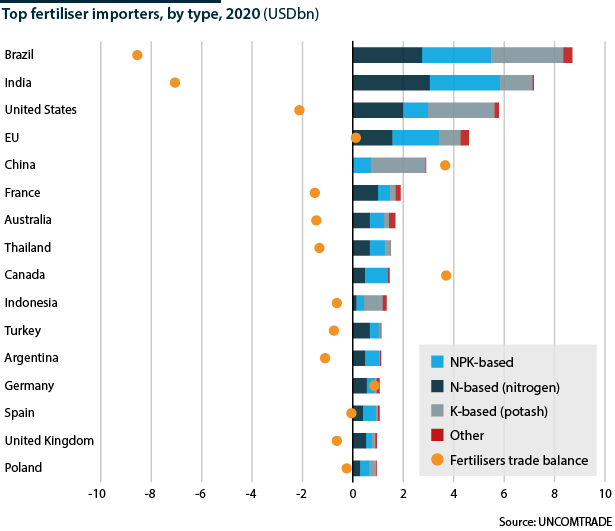 In its November revision, the IFA forecast supply of N-, P- and K-based fertilisers to be lower in 2021/22 due to supply disruptions:

The Western ban on Belarusian fertilisers means that the K-based potash market faces disruption. Belarus previously exported around 12 million tonnes of potash fertiliser annually. Estimates in early February that up to 2 million tonnes would fail to reach the market will now be revised upwards.

Supply of all types will be lower than expected in November, and will fall more than demand.

The fertiliser market has been stable over the past 30 years but the convergence of so many supply disruptions will disrupt it more, and for longer than the 2008-09 disruption did. Fertiliser production, trade and demand will be lower. Yara, the world's second-largest ammonia producer, announced in early March that its ammonia and urea production would operate at 45% capacity this year due to supply disruptions.

The United States, Canada, Brazil and Tunisia are among countries planning to produce more fertiliser domestically. The US Department of Agriculture this month announced a USD250mn plan to support production, with funds expected to be awarded to projects from the end of 2022. Canadian giant Nutrien plans to raise potash output by nearly 1 million tonnes this year.

Brazil announced a National Fertiliser Plan last month, aiming to reduce import dependency from 85% to 45% by 2050. It wants to raise its nitrogen production capacity to 2.8 million tonnes by 2050, and to attract USD10bn of private investment to facilitate this.

Late last year, and again last month, India increased the subsidisies it gives farmers to buy fertiliser. India gets most of its potash-based fertiliser imports from Russia and Belarus, and has not signed up to Western sanctions against either.

It will take years for Western countries to reorient their supply chains towards allies. Meanwhile, prices of fertiliser and food will be volatile and historically high. This will increase the number of people facing poverty and food insecurity.

It is not axiomatic that reduced consumption of fertiliser will result in lower agricultural yields; that would only be the case if fertiliser were used efficiently worldwide.

Research by David Wuepper et al in 2020 compared how much nitrogen pollution economies are causing from fertiliser use with how much they increase their yields relative to neighbouring countries. China and Brazil stand out as over-appliers. 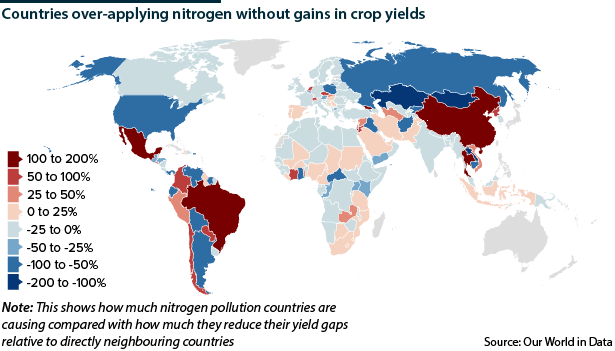 In many lower-income regions, fertiliser demand is lower than would be ideal for crop yields, due to inaccessibility and unaffordability. The United Kingdom used 169 kilograms of fertiliser per hectare of cropland in 2017 whereas China used 220 kilograms. In contrast, Nigeria used 11 kilograms per hectare and Bolivia 3.2 kilograms.

The fertiliser supply squeeze is likely to retard global development convergence, in common with other developments during the pandemic.

The gap between the fertiliser use and needs of high- and low-income economies makes it impossible for multinational organisations and NGOs to recommend universal solutions. At the same time, these organisations are key to ensuring that as many farms as possible have access to the advice and ideally the funds they need to use fertiliser more efficiently.

Sustainable farm management practices such as crop rotation are key. New technologies including drones and satellite imagery can help farmers know which parts of their farms need more or less fertiliser. Plant-breeding technologies capable of changing a crop's genetic make-up to aid fertiliser absorption could also grow in use.

Estimates see the agritech market doubling from less than USD17.5bn in 2019 to more than USD40bn in 2027. Private equity investment in agritech start ups has grown by more than 50% per year for the last four years. However, it will take years to roll these technologies out widely, and especially to lower-income countries.

There will be an environmental upside to lower production and consumption of fertilisers. Ammonia is made at high temperatures and accounts for 1-2% of global greenhouse gas emissions, according to the Climate Portal run by the Massachusetts Institute of Technology. Moreover, fertilisers produce emissions after application as crops only absorb around half the amount applied. The rest can damage the soil or run into waterways, disrupting biodiversity.

Growing shortages of fertiliser and food will have lasting ramifications for the global economy (see INT: High food prices may spark social unrest - March 8, 2022). WTO Director-General Ngozi Okonjo-Iweala said this month that "my worry is that we have a food crisis that is brewing". Fertiliser, which is key to food output, will be central to this.