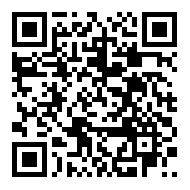 Since its founding, Zhejiang Sega Science and Technology Co., Ltd. is committed to researching and developing pesticide formulations.

In 2019, SEGA Technology’s forestry disease and pest control product Songliang (Emamectin Benzoate 2.3%) won the second prize of the National Liangxi Forestry Science and Technology Award. In 2020, the Program of New Product Development and Application Technology of Green Pesticide (Fungi) for Major Forest Disease won the second prize of the Science and Technology Progress Award of the Education Bureau. In 2021, SEGA Technology was awarded the honor of “special new small and medium-sized enterprise” of Zhejiang Province. Meanwhile, the company released its bait concentrate (Emamectin Benzoate 0.087%) and Chilo suppressalis attractant, which are deemed as green pesticides.

Bactrocera belongs to Diptera’s Tephritidae family, mainly Bactrocera dorsalis, Tetradacus citri Chen and Bactrocera cucurbitae fly flexibly at agility. As its body looks like a bee, it is called “needle bee.” It is a migratory insect, and its egg is laid inside the fruit peel through the tail needle. The egg mass cannot be detected visually, and chemical control is not capable of seizing the right moment of application to achieve the desired effect. Bactrocera is a type II quarantine target in China, it can survive in the wild generation from generation, living on a broader range of hosts, where larvae cause harm to fruit seedlings. 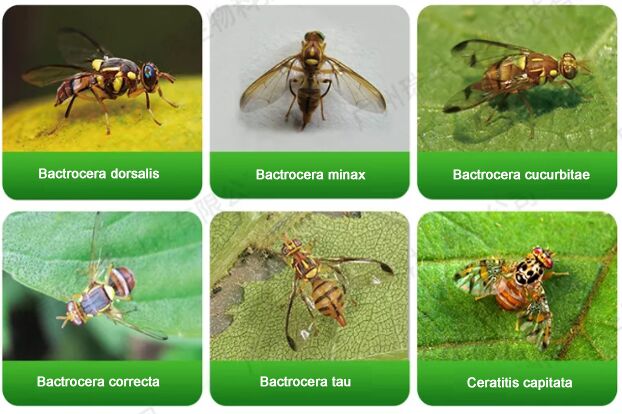 Bactrocera has a tail needle in the tail, which is its ovipositor. The adult insect uses the ovipositor to pierce into the fruit to lay eggs, where the hatched larva eats fruit pulp, causing the fruit to turn yellow in parts. This is followed by the rotting and stinking of the whole fruit, causing the fruits to fall off, distortion in its shape, coagulation of the pierced part, hardening of the peel and a bitter taste of the fruit. Even if some fruits do not rot, the quality and yield of the fruits or melon are seriously affected. Bactrocera has a strong reproduction capacity and a wide range of hosts, causing damage all year round, which leads to severe economic losses. 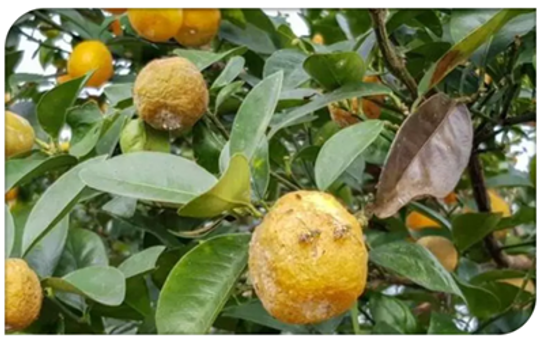 The difficult control of Bactrocera lies in the way it feeds its adult on nectar and rotten fruit, where there is no specific area of feeding, and there is no particular habitat. Instead, the female adult lays eggs in the peel of the fruit or melon and the larvae hatch into fruit pulp to feed on themselves and grow. In addition, the adult’s damages are not only limited to endangering fruit or melon orchards when larvae are parasitized in the fruit pulp. These are the reasons why conventional control measures cannot achieve expected effects.

SEGA Technology’s Guomanqiu is effective on control of Bactrocera and protection of fruit and melon, as supported by the following distinctive features:

1)Optimized Formula: After researching the nutritional needs and the way to feed Bactrocera, the product formula of bait concentrate was screened out and optimized.

2)Polymer controlled release technology: a variety of polymer embedding materials and microencapsulation technologies are used, which make the product hold for a long time under the sunlight and high temperature, in a way that the smell is slowly released, which lasts longer.

3)Rainfastness design: a variety of auxiliary materials are used to strengthen the adhesion of the agent on the leaves, and the embedding technology resists the dilution of the agent by rainwater. This enhances rainfastness when rainfall is not too heavy and improves the long-lasting effect during an on-site application.

Bait concentrate is characterized by a synergy of viscosity and color of the attractant, which improves the ability to attract and induces male or female adult insects, which are killed with better results achieved from the sticky emamectin benzoate in combination with the poisoning effect. Bait concentration solves the difficult problem of controlling Bactrocera by attractants, resulting in effective control of Bactrocera in combination with agronomic measures.

Chilo suppressalis (Walker) belongs to pyralidae of Lepidoptera. It is one of the most severe rice insect pests in China, which eats rice stem and causes harm to tillering, resulting in sheath wild and dead heart seedlings. It endangers booting and heading, leading to withered booting and white head. It harms grouting and milk-ripening rice, resulting in half-withered spike and insect-injured plants.

Sex attractants are sex pheromone products that attract and kill male adult insects. Due to the significant decrease of male insects, female insects cannot find male insects to mate. So, fertilized eggs are greatly reduced, resulting in the inability to reproduce. Hence, the population quantity in the crop field has gradually declined. Thus, harm is considerably reduced, contributing to the achievement of the effect of control. In 2021, SEGA Technology was granted registration of Chilo suppressalis sex attractant.