While cover crops benefits are proven, Texas A&M AgriLife scientists are finding one size does not fit all relating to their use in the semi-arid regions of the state. What works in the dry, sandy South Plains may not be applicable in the northern High Plains or Rolling Plains.

Cover crops are grown for a specific duration in the offseason, then terminated and left in the field to decompose, cycling nutrients in the soil. They protect the soil surface and provide residues to potentially improve soil structure, reduce compaction and increase soil organic matter. This helps reduce soil erosion, increase water infiltration and improve soil’s water-holding capacity.

While one size doesn’t fit all operations, the research in the large wheat- and cotton-growing regions of Texas shows that cover crops have a value. They serve as yet another tool to be considered in the conservation toolbox.

Texas A&M AgriLife researchers recently participated in a project funded by the Soil Health Institute that highlights farmers’ challenges and the benefits of using conservation management.

“In the southern portion of the High Plains, sandy soils dominate,” Lewis said. “They are highly erodible to spring winds, which makes this an area that can benefit from the use of cover crops to reduce soil loss due to wind erosion.” 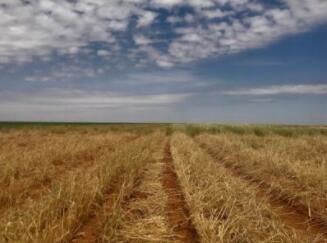 Wheat on the left and rye on the right are featured in a cover crop species selection study that also looked at seeding rates and termination timing in the South Plains region. (Texas A&M AgriLife photo by Katie Lewis)

Farmers are hesitant to implement cover crops with the risk of not having spring or summer rains to replenish the moisture used by the cover crop.

Research has demonstrated that yields are not negatively impacted by reducing seeding rates of wheat and rye from 60 pounds per acre to 30 pounds per acre and terminating at least six weeks prior to planting cotton. Reduced lint yields have been observed in a long-term continuous cotton no-till with a cover crop system. And it has also shown that decreasing above-ground biomass with an earlier termination time has a positive impact on yield but doesn’t result in increased potential for erosion.

“We have also been evaluating nitrogen fertilizer management strategies,” Lewis said. “We’ve determined that applying a larger percentage of total nitrogen closer to planting or shortly after emergence when following a cover crop can overcome any early season nitrogen limitations created by the cover crop and thus result in a greater return on fertilizer investment.”

She noted this is the time to develop a plan for optimizing cover management before planting your cash crop.

“Remember, cover crops should be well adapted for our climate and chosen with a goal in mind,” Lewis said.

If the goal is to reduce wind erosion, using something like wheat or rye as a cover crop would be the best choice. Legumes are difficult to get established following cotton harvest, and with the goal being to fix nitrogen, they must often be terminated too early before nodulation and fixation occur.

While researchers believe cover crops can be extremely beneficial in the water-limited environment of the South Plains, they say management strategies must be specific for the region.

“More producers are incorporating drought-tolerant crops such as cotton into corn rotations to extend their irrigation supplies, in addition to using conservation tillage practices to minimize soil disturbance and preserve residue on the soil surface,” she said. 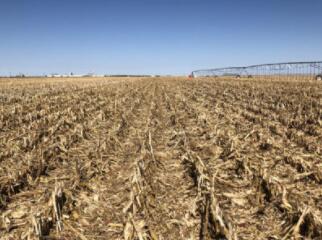 Cotton is a very low-residue crop, so many producers are beginning to utilize cover crops in its production. However, they question how cover crop water use may affect the next economic crop, Bell said. Additionally, in corn-cotton rotations where conservation tillage is practiced, the question arises as to whether the corn residue provides similar benefits to the live cover crop.

“In semi-arid environments, conservation tillage results in very slow decomposition of crop residues,” she explained. “This allows the residue to serve as a blanket to minimize evaporation losses, reduce soil crusting and improve water infiltration. As the residue decomposes, it adds nutrients back into the system.”

Bell initiated a large-scale, on-farm research initiative in cooperation with the North Plains Ground Water Conservation District and their cooperating farmer to examine the potential use of cover crops in corn-cotton rotations.

There is a very narrow window to establish a cover crop in northern Texas High Plains cropping systems. Harvest generally occurs in late October or November, and planting the next crop generally occurs in May. Since the cover crop should be terminated 15 to 35 days prior to planting the economic crop, there is actually only a few months of active growth — February, March and early April — depending on spring conditions.

“Some of the questions we are trying to answer include: Are we achieving the benefits from the cover crop in this short period, and are we replenishing water use with timely precipitation? Should we use limited groundwater to replenish stored soil water if we do not receive late spring rains? Many producers no longer have the well capacity to do that.”

The research included large, replicated plots comparing fallow, a wheat cover crop and mixed species cover crop. The first cover crop was planted in the fall of 2018 behind corn, and cotton was evaluated in the first cropping year, 2019. The 2019 data showed that, after four months of cover crop growth, there was greater infiltration with the cover crop, but there was above-average rainfall in May at planting. There also was a significant difference in plant emergence between treatments. Although emergence was delayed, plants developed more quickly in the cover crop treatments, once established.

“We saw a benefit from the wheat cover protecting the young cotton seedlings from severe winds in June 2019,” she said.

“Ultimately, though, multi-year yields tell the story for a farmer,” Bell said. “We have seen completely different results the last two years. Neither the 2020 corn grain nor the 2021 cotton lint yields were significantly different between treatments.”

She said results will vary due to the project design, annual environmental conditions, and the many scenarios under which cover crops are researched. Similarly, producers may also see different responses depending on soil texture, soil moisture, tillage system, irrigation availability, crop rotation, fertilizer program and other factors.

“If we were baling the corn residue or evaluating a conventional tillage system, we might see a greater yield benefit from the cover crop because the cover crop residue may reduce early season soil evaporation and crop water use,” she said. “We are currently seeing the corn residue in conservation tillage corn-cotton system providing the same benefit regarding soil evaporation.”

Bell and collaborators will repeat the study again this year. They will be entering the corn phase of the rotation. As the region’s water supplies continue to decline, long-term research is also needed under very limited irrigated and dryland systems.

There are still many unanswered questions and research opportunities in both irrigated and dryland systems.

“Since winter wheat is widely grown as a forage or cash crop for grain, seed is readily available, making it a popular choice as a cover crop,” DeLaune said. “We have seen a greater infiltration rate with terminated wheat cover crop – doubled or tripled our infiltration rates.” 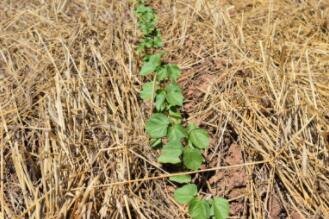 DeLaune said everyone knows cover crops aren’t free, as there is a cost for the seed and use of soil moisture, but the benefits can potentially outweigh the costs over time.

“In pivot or subsurface irrigated systems, we have noted a 9% to 12% increase in net returns over a six-year average for a wheat cover crop compared to no-till or conventional tillage without a cover crop,” he said. “In dryland, no statistical differences have been observed among cover crop and non-cover crop treatments.”

He said his team uses neutron probes in all cover crop research plots to document water use.

He said he likes to let small grains surpass the boot stage before terminating it. This may use a little more water, but that’s what makes the lasting residue, which is the key to protecting the soil surface and cotton seedlings, building root biomass and subsequently infiltration. As rye matures earlier than wheat, rye may be terminated sooner than wheat to meet this goal.

When planting cover crops after cotton harvest, the biomass produced occurs over a four-to-six-week period in March-April. The ultimate goal with cover crops is to build soil structure and make it more functional, he said.

While relatively consistent results have been observed under irrigated conditions, DeLaune said results under dryland conditions are much more variable from year to year. Since 2012, crop failures have been observed in 2012, 2017 and 2018, although a late sorghum crop was achieved in 2017. However, during those years, crop loss was consistent across all treatments, including those systems with cover crops and no cover crops.

DeLaune said the dryland study had not been fertilized since the study’s inception in 2011. As observed in the long-term dryland yields, legume cover crops could potentially make economic sense with the current fertilizer prices. Allowing legumes to reach bloom will maximize any potential nitrogen-fixing benefits, which will require growth into April.

“The high cost of nitrogen fertilizer back in 2010 and 2011 is really the reason we initiated this study in the first place and included legumes,” he said.