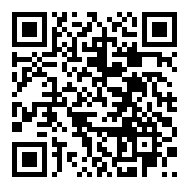 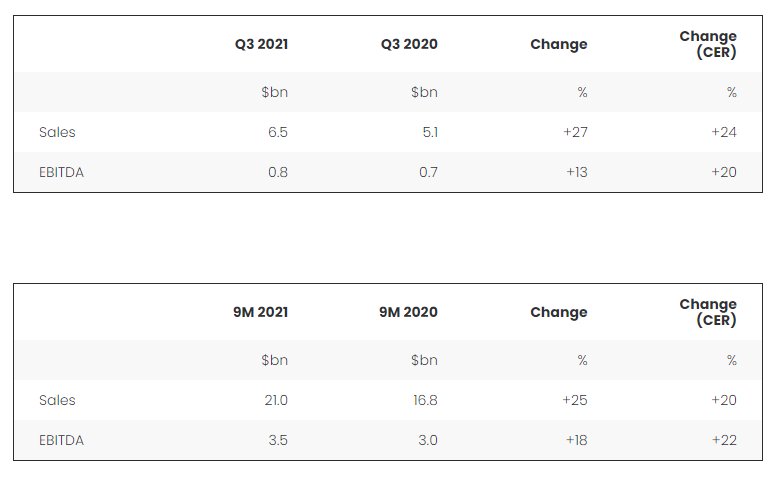 Syngenta Group maintained the sales momentum it had built the first half of 2021 in the third quarter. All business units delivered double-digit year-on-year growth.

Harvest setbacks due to severe weather extremes and market supply constraints exacerbated the already low stock-to-use ratios of key grains and led to continued robust grain prices while driving strong demand and growth for Syngenta Group’s products and services. Demand was strongest for the Group’s technologies that enable farmers to grow crops in difficult weather conditions while also increasing yields and productivity of existing arable land.

Syngenta Group China delivered strong growth across all segments. MAP sales tripled to $1.5 billion in the first nine months by helping farmers improve soil health, reduce greenhouse gas emissions and improve the quality and value of their crops. The MAP beSide™ program is a consumer product brand that connects farmers with consumers and stands for high quality, sustainably-grown and nutritious food. As of the end of the third quarter, there are now 51 food products on store shelves with the MAP beSide™ logo and QR code, with 33 of those products introduced this year. The number of MAP centers has increased to 438, supported by over 200 strategic partners.

Procurement, logistics and other operating cost increases were partially offset by higher selling prices across all businesses. Syngenta Group also benefitted from increased synergies, delivering ahead of plan. The strong growth of MAP, which has a lower EBITDA margin than the Syngenta Group average due to the rapid build-up of new centers, slightly lowered the EBITDA margin for the Group. The existing MAP center margins continued to improve.

Synergy-driven sales more than doubled in the first nine months to more than $0.5 billion with a profit contribution of $0.2 billion.

“Our strong performance shows that our teams are helping farmers address climate change and feed the world. We’ve seen a great need for our products and digital tools to help farmers globally grow high-quality foods despite difficult weather challenges,” said Syngenta Group CEO Erik Fyrwald. “Our climate-friendly agricultural products and digital services are helping create opportunities for farmers around the world for a more sustainable future.”

Syngenta Group CFO Chen Lichtenstein said, “I’m pleased to see that our teams have achieved double-digit sales growth across all business units. We have been able to address the global supply chain challenges during the quarter and meet the demand of our customers for innovative products.” 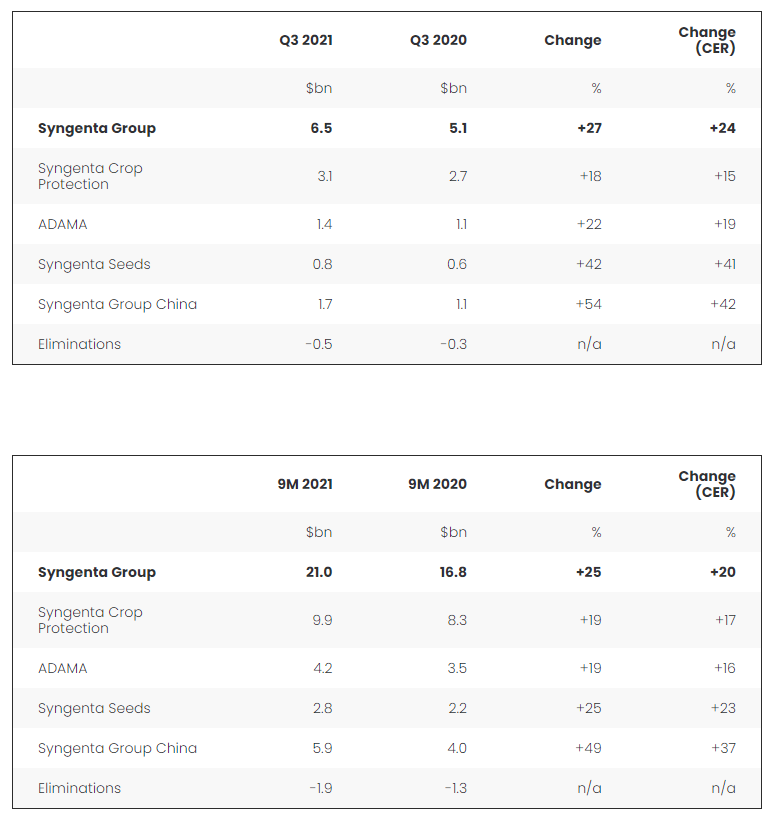 Strong growth across all regions was driven by robust grain prices and market supply constraints in the third quarter, encouraging some customer pre-buying.

The demand for the biostimulant ISABION®, which improves harvest quality and quantity by helping plants balance nutrition, further increased and contributed to growth of the Group’s biologicals business.

Seedcare launched VAYANTIS® in the U.S. and Canada, a broad-spectrum novel seed treatment fungicide dedicated to protecting soybean and corn from key diseases such as pythium. It also supports early planting to maximize yield and enables conservation tillage practices to protect the soil.

In the first nine months of 2021, ADAMA sales grew by 19 percent (+16 percent at CER), with continued robust growth in all key regions, pushing year-to-date-sales to $4.2 billion. ADAMA continues to address higher procurement and production costs.

Field crop sales in Europe, Africa and the Middle East grew by 13 percent; in North America, sales increased by 9 percent; sales in Latin America increased by 28 percent; in Asia Pacific (excluding China), sales were up 22 percent and in China, sales tripled due to the consolidation and growth of Winall.

Vegetable Seeds saw growth in all regions, resulting in a 12 percent increase in sales and Flowers recorded sales growth of 20 percent.

North America saw strong growth in soy and corn, with share gain in both crops. The demand for ENOGEN™ corn for feed, which increases feed efficiency in both beef and dairy, experienced double-digit growth and is on track to have a record year in sales. Newly published university research showed methane emissions per unit of milk were reduced by more than 7 percent in dairy cows fed ENOGEN™ silage.

Corn sales in Latin America grew by 29 percent in the first nine months, largely driven by the Agrisure Viptera™ technology. The trait remains the only above-ground insect trait that provides effective control of the Fall army worm and achieved strong growth both in our branded seed business and through successful out-licensing.

Syngenta Group China, consisting of the Group’s seeds, crop protection, crop nutrition, digital activities in China and MAP, achieved sales of $5.9 billion in the first nine months of the year and grew 49 percent compared to the previous year (+37 percent at CER).

MAP and digital revenues tripled. In the first nine months of 2021, 113 new MAP centers were added, for a total of 438 centers in major agricultural areas in China. With the expansion, approximately 12 million hectares of land are now equipped with MAP’s digital solutions. In addition, MAP beSide™ agricultural products, which offer quality control and traceability certification all the way to consumers, were further expanded. 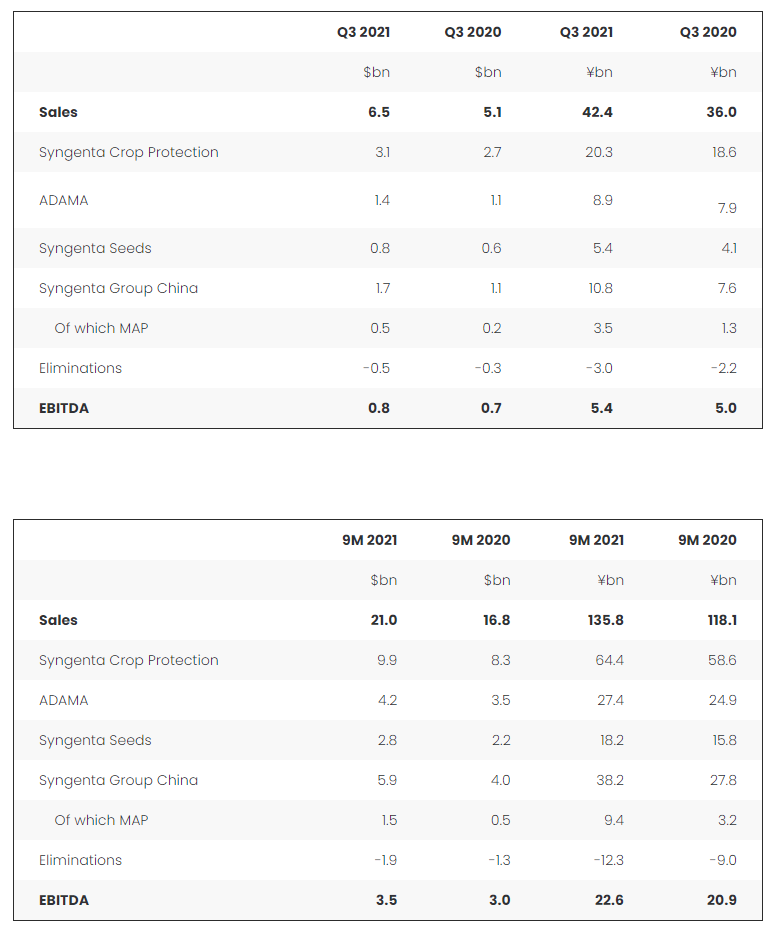 Unless otherwise mentioned, comparisons are to the same period in 2020.

Syngenta Group was formed in 2020 as a business combination under common control under PRC GAAP; on this basis, consolidation starts from the period either ChemChina or Sinochem acquired control of the relevant entity and reported figures for 2020 include the respective companies in the consolidation scope for the year.

EBITDA is a non-GAAP measure and EBITDA as defined by Syngenta Group may not be comparable to similarly described measures at other companies. Syngenta Group has defined EBITDA as earnings before interest, tax, non-controlling interests, depreciation, amortization, restructuring and impairment. Information concerning EBITDA has been included as it is used by management and by investors as a supplementary measure of operating performance. Syngenta Group excludes restructuring and impairment from EBITDA to focus on results excluding items affecting comparability from one period to the next.

EBITDA as used in this press release excludes one-time events (note Syngenta AG H1 condensed consolidated financial statements); other documents may treat this as an underlying or adjusted EBITDA. EBITDA excludes other one-off or non-cash/non-operational items that do not impact the ongoing performance of the business, as well as the impact of a time-bound, Group launch long-term incentive scheme for senior management.

Results in this report from one period to another period are, where appropriate, compared using constant exchange rates (CER). To present that information, current period results for entities reporting in currencies other than US dollars are converted into US dollars at the prior period's exchange rates, rather than at the exchange rates for the current year. The CER presentation indicates the business performance before taking into account currency exchange fluctuations. When referred to as such, “the Group” implies Syngenta Group.