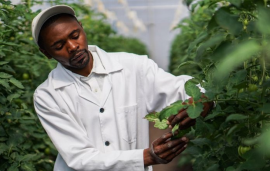 Ghana’s agricultural produce can attract premium prices, derive huge foreign earnings and help the country to reduce agriculture emissions, if the use of biological control (Bio-control) of pest and disease approach is aggressively explored.

Biocontrol approach has proven to be a better and cheaper option than the use of agrochemicals, which adversely impact the ecosystem through leeching, and the depletion of flora and fauna.

Mr Raymond Kwaku, Glikpo, a Deputy Director of Agriculture and Head of the Biocontrol Unit of the Crop Pests and Disease Management Division of the Plant Protection and Regulatory Services Directorate, Ministry of Food Agriculture, told the Ghana News Agency.

He said studies had shown that water bodies, fish, vegetables, food, soil, and sediment had been found to be pesticide contaminated.

Mr Glikpo explained that with the right investment in biocontrol approach, losses due to pests and disease at production and post-production, could be reduced with farmers producing purely organic produce, which was high in demand on the international market.

“With the foreign market, there is a traceability system, which traces produce from the point of production to export and if they find any pesticide residue or harmful organism, the product will be returned at the cost of the exporter,” he noted.

“If we want Agriculture, which is said to be the back bone of the nation’s economy to develop and contribute meaningfully to our Gross Domestic Product, then the attention should be on biocontrol. It is safe, sustainable and at no cost to the farmer.”

Mr Glikpo said the Centre in collaboration with the University of Ghana, and Centre for Agriculture and Bioscience International (CABI), had successfully piloted a biocontrol agent Telenomus Remus, an egg parasitoid, on a trial at the University of Ghana Research Centre to reduce Fall Armyworm (FAW) infestation in the last major and minor seasons.

“These two are being reared at our lab. The egg parasitoid has 80 per cent Fall Armyworm management efficiency, while the larval parasitoid has a reduced rate of 20 percent.”

He noted that the Centre with the new technology and financial support could upscale to reduce the current figure of FAW infestation of about 66,000 hectares nationwide.

“Biocontrol does not eradicate but reduces it to acceptable levels. Farmers need not spend so much money on buying pesticides to control FAW as being done currently,” he said.

Madam Morag Webb, Head of Science and Policy at the Europe-Africa-Caribbean-Pacific Liaison Committee, at a webinar on increasing access to Ghanaian Goods to the EU Market, urged Ghanaian agri-food exporters to EU market to focus more on trading in organic and biodiversity-compliant agriculture produce.

She said such products were in line with targets within the EU under the new Green Deal policy initiative, a comprehensive, ambitious, and long-term plan to protect nature and reverse the degradation of ecosystems under biodiversity strategy for 2030.

Madam Jewel Kudjawu, the Acting Director, Natural Resources at the Environmental Protection Agency, told GNA that Ghana had recorded about 120 invasive species and experienced a number of invasions in the aquatic and terrestrial ecosystems and on agricultural crops.

She said the species posed an enormous threat to ecosystems and biodiversity as well as livelihood strategies.

Click the picture below to download the free magazine 2021 Biologicals Special, and find more reports on biofertilizers, biostimulants and biopesticides.