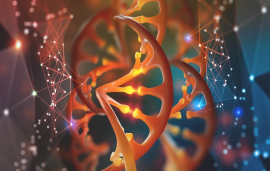 With two new funding sources, Yiping Qi, associate professor in the Department of Plant Science & Landscape Architecture (PSLA) at the University of Maryland (UMD), continues his work to expand the reach and utility of CRISPR gene editing technologies. Funded by the United States Department of Agriculture’s National Institute of Food and Agriculture (USDA-NIFA), Qi and his team will be testing new delivery technologies for CRISPR-Cas12a to develop a pipeline for genome editing in carrots. This could lead to the production of more nutritious and hypoallergenic carrot varieties that can be quickly introduced into the marketplace. Additionally, Qi will continue his search for novel CRISPR-Cas12a variants with funding from the Maryland Innovation Initiative (MII), with the ultimate goal of finding more CRISPR tools that are optimized for crop production.

“With this new USDA funding, we are excited to showcase CRISPR-Cas12a gene editing technologies that my lab has been working on in carrots as an important vegetable,” says Qi. “The major innovations in this work are really in the delivery mechanisms that can make targeted and precise edits without the production of a highly regulated GMO [genetically modified organism]. But we also want to explore more CRISPR-Cas12a variants that can be useful for crop production, so the MII grant provides that support.”

As Qi explains, most current methods for targeted mutations or precise genome edits rely on the use of transgenes (transferring a gene from one organism to another) that would then be regulated as GMOs. This is typically done by delivering genetic material with agrobacteria used to “infect” the plants and transfer the desired trait. However, for carrots, Qi is testing different delivery methods that use readily available proteins and guiding molecules to deliver the same material without using agrobacteria and transgenes. This method is new to carrots, and would allow new varieties to make it to market much faster without the need for GMO regulations.

“Hopefully, we can take advantage of these technologies to develop some interesting and useful plants that have consumer benefits,” says Qi. “For example, we are targeting a gene to help the carrot accumulate more beta carotene, which can boost nutritional value. We are also targeting two genes that can potentially be knocked out to create a hypoallergenic carrot that could be eaten by those with certain allergies.”

These varieties could not only be useful in and of themselves, but the work will establish a process for genome editing in carrots that hasn’t been previously developed. This will save substantial time over traditional breeding, and Qi hopes will inspire many researchers and breeders to consider the possibilities of this technology in crops like carrots.

“The whole project is to develop new technology for genome editing in more niche or minor crops that can have major impacts,” stresses Qi. “Not much work has been previously done in carrots, and I hope this will open up a lot of doors for gene editing in other root vegetables and more.”

With new funding from MII, Qi will continue to explore new patentable CRISPR variants, hoping to find more tools that work efficiently at lower temperatures. “For work in human cells, gene editing is happening at the temperature of the human body, which is almost 100 degrees Fahrenheit,” says Qi. “This is the optimal temperature for most CRISPR systems, but this isn’t the best temperature for doing work in plants. All that work needs to be done around room temperature where plants can comfortably grow. So finding tools that are optimized for this lower temperature application is important for advancing genome editing in crops.”

Qi’s team has established a proprietary pipeline for identifying new candidate CRISPR variants, and he will first test these candidates in rice and tomatoes to expand the scope of gene editing in crops.

This work is funded by the United States Department of Agriculture’s National Institute of Food and Agriculture (USDA-NIFA), Award #2021-67013-34554, and the Maryland Innovation Initiative (MII).