Fertilizer, agrochemical demand falls in Nicaragua at beginning of 2021-2022 season 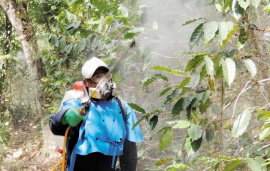 Agricultural sector grew 4.1%, as a result of enhanced work in the cultivation of sugarcane, bananas, beans and tobacco, among other crops, according to the Monthly Index of Economic Activity (IMAE) published by the Central Bank of Nicaragua, between January and March.

The Central Bank numbers indicate that in the first four months of the year, producers were forced to invest more in the purchase of fertilizers and agrochemicals because the price of agricultural inputs soared due to the high global demand for these after the reactivation of trade and production of goods.

Between January and April of this year, Nicaraguan producers paid US$103.20 million in agricultural inputs, while in 2020 for the same date it was $90.41 million, which implies a growth of 14.1%.

However, that does not mean that they bought more, on the contrary, the purchase was much less. Until April in volume, 125,676 tons were imported, lower than the 142,092 tons that were invoiced in the same period of last year.

And although the import volumes are higher compared to 2019, when the tax reform was applied, the producers are far from reaching what was billed in 2017 (147,221 tons). This despite the start of the 2021-2022 agricultural cycle in mid-May, whose land preparation process takes place weeks before the onset of winter.

According to the highest bank issuer, producers frequently import fertilizers, urea, insecticides, seeds, veterinary drugs, potassium and calcium sulfates. The use of these inputs is key to increasing crop yields and controlling pests in them.

One of the most used inputs for production is insecticides. Until April of this year, purchases amounted to $24.53 million, while in 2020 it was $18.4 million, which is an increase of 33.3%.

In the case of urea, a low-cost fertilizer, there was less demand, since $9.31 million was paid to the international markets, which was $2.62 million less than in 2020. This drop in value is because 15,156 tons less of urea was purchased as compared to last year when 48,481.5 tons were brought in. It should be noted that this fertilizer is an important purchase due to the high concentration of nutrients.

The price of urea is closely linked to the evolution of the international price of oil, which is already at 2018 levels, that is before the COVID-19 pandemic that broke out in December 2019 and caused oil to hit the ground in 2020, due to the semi-paralysis suffered by the world economy.

Yesterday, oil prices ended on a high for the first time since October 2018, driven by demand for crude and the election of conservative Ebrahim Raisi in Iran, which could complicate negotiations on the Iranian nuclear program and the return of crude from that country to the market, reported Agence France-Presse. In addition, the Nicaraguan productive sector has been affected, firstly by the socio-political crisis that caused the regime to implement a brutal fiscal reform in 2019, which made the price of agricultural inputs more expensive by between 20 and 30%. Then, this year, another increase was felt due to the increase in global demand as a result of the pandemic.

For Guillermo Jacoby, president of the Association of Producers and Exporters of Nicaragua (APEN), despite this rise in inputs, producers have been motivated to continue sowing due to the increase in primary commodities.

"Commodities of primary products have risen by 35 to 40% worldwide. In addition to that, transportation has risen, because it turns out that containers go from China to the United States, but no containers are traveling to other countries. Since containers are not available, the cost of transport rises and we see that the demand for primary products skyrocketing due to the increase in the post-COVID economy. That means the worldwide production that had decreased does not meet the demand and it creates a certain shortage and that leads to a rise in input prices,” Jacoby said.

Álvaro Vargas, president of the Union of Agricultural Producers of Nicaragua (Upanic), recently told LA PRENSA that producers were making an effort to obtain fertilizers this year, encouraged by the increase in international prices, while agreeing with Jacoby.

The World Bank said in April that it expected agricultural prices to remain high, but they could stabilize in 2022. “Metal prices are projected to rise 30%, while prices of agricultural products will fall. They will increase by almost 14%, thanks to the rebound in economic activity, as well as some specific supply factors, particularly in the oil, copper and some basic food sectors. Almost all commodity prices have exceeded pre-pandemic levels," determined the World Bank (WB) in its analysis titled, "Commodity prices stabilize after the increases in early 2021, hand in hand with the global economic recovery."

“So far, global growth has been higher than expected, and vaccination campaigns are already underway. These trends have driven commodity prices up. However, it is impossible to predict how long the reactivation will last,” said Ayhan Kose, interim vice president of Equitable Growth, Finance and Institutions, and director of the World Bank's Outlook Group.

"Emerging markets and developing economies, whether they are commodity importers or exporters, must strengthen their resilience in the short term and prepare for the possibility that growth will lose momentum," he said.

The drop in the demand for fertilizers and other agricultural inputs coincides with a reduction in the financial sector's loan portfolio. Data from the Superintendency of Banks and Other Financial Institutions (Siboif) indicate that the agricultural portfolio until March of this year, shows a decrease in the portfolio balance of C$607 million. Consequently, the number of loans was reduced by 1,732. In the case of the livestock sector, which has a smaller portfolio, 4,928 loans had been granted in December 2020, but as of March this year this came down to 3,636.

According to the Monthly Index of Economic Activity (IMAE), published by the Central Bank of Nicaragua, between January and March agricultural sector grew 4.1%, as a result of greater work in the cultivation of sugar cane, bananas, beans, tobacco, among others.