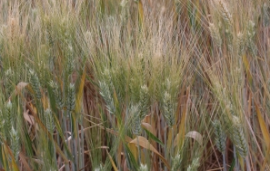 An innovative new Grains Research and Development Corporation (GRDC) investment will investigate whether an international research finding could be part of the genetic solution for Australian growers managing the costly disease Fusarium crown rot.

Caused by the fungus, Fusarium pseudograminearum, crown rot is a significant disease for winter cereals such as wheat, barley, durum, triticale and oats, costing the nation’s grains industry an estimated $404 million in lost yield annually.

The latest GRDC crown rot investment will be led by CSIRO and will expand on international research findings last year that discovered crown rot resistance in a wild relative of cultivated wheat – tall wheat grass.

This $1.9 million, three-year research partnership will enable the importation of the newly identified resistance source – gene Fhb7 – to assess how it performs in protecting wheat crop yields from crown rot disease pressure under Australian conditions.

GRDC Manager Wheat Genetic Technologies Pip Wilson said the resistance source could potentially add to the arsenal of genetic material being developed in breeding and pre-breeding circles in the quest for crown rot resistant or tolerant varieties.

“Currently there are no effective chemical or biological controls for grain growers struggling to contain the disease on-farm,” Dr Wilson said.

“However, GRDC invested research has helped provide growers with improved understanding for managing the disease with key tools such as tests to identify and assess inoculum levels, rotational strategies with non-host crops and stubble management.

“But ultimately growers want varieties with tolerance or resistance that can achieve higher grain yields in the presence of crown rot. This project, along with other GRDC investments in the pre-breeding and breeding space, has the potential to help us develop those varieties.

This new GRDC research partnership with CSIRO is one of many undertaken in recent years with a focus on delivering germplasm and markers for breeders to use to reduce the impact of crown rot disease.

“By 2022 we would hope to be able to undertake some field trials in different growing environments, to test the resistance and tolerance of Fhb7 lines combined with existing lines that were developed as part of a pre-breeding collaboration between GRDC, CSIRO, University of Southern Queensland and University of Sydney,” Dr Liu said.

“This project has been specifically designed to leverage the historic progress in crown rot resistance pre-breeding that this collaborative work has delivered, as well as utillise international progress being done in sourcing Fusarium resistance from wild varieties.”

This is not the first time the GRDC has invested in research utilising genetic resources from wild crop species for potential incorporation into new disease-resistant, stress-tolerant, high-yielding breeding lines. An international research collaboration that includes the GRDC has been involved in the collection and screening of wild chickpea species from the Middle East to build genetic resources for Australian chickpeas.

To read more about this new research go to GRDC GroundCover online.