A thousand tonnes of harmful counterfeit pesticides seized in EU 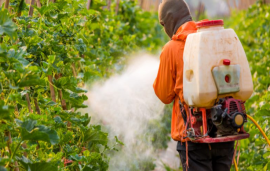 The EU’s law enforcement agency, Europol, says it took 1,203 tonnes of illegal pesticides off the market between January and April on the back of a rise in online sales of banned substances.

Europol coordinated the sixth edition of operation “Silver Axe”, targeting the trade in counterfeit and illegal pesticides, between 13 January and 25 April.

The operation resulted in 12 arrests, 763 reported infringements, and 268 seizures, involving a total of 1,203 tonnes of illegal pesticides, the agency said in a press release on Thursday (17 June).

The joint action involved law enforcement authorities from 35 countries, including all 27 EU member states as well as eight third party countries, and was supported by the EU’s Intellectual Property Office (EUIPO), together with the European Anti-Fraud Office (OLAF), the European Commission’s DG SANTE and the leading EU crop protection association CropLife Europe.

The abuse in the trade of illegal pesticides varies from trafficking counterfeit or mislabelled products, to irregular imports of banned substances, such as chlorpyrifos, a pesticide linked with brain damage and one of the substances specifically targeted during the operation.

While Asia and South Asia remain the major source regions for illegal pesticides, Europol said it had also noticed an increase in online sales.

Given their potential for harm, the pesticide industry is closely regulated, with pesticides among the most regulated products in the world.

As such, the use of cheaper illegal and substandard products poses a significant threat for both environmental and human health.

For example, one case uncovered by the operation involved the use of unregulated neonicotinoid pesticides containing an unauthorised product which decimated the local bee population, wiping out the vital pollinators.

Europol executive director Catherine De Bolle said that the “impressive” seizure of more than 1,000 tonnes of illegal pesticides clearly demonstrated the value of teaming up with different organisations.

Meanwhile EUIPO head Christian Archambeau said the haul showed how national and EU enforcement authorities and agencies working together could make a difference by taking off the market counterfeit, unregulated and often dangerous products.

Likewise, Ville Itälä, head of OLAF, said that the office was “proud to have played its part in the ongoing fight against illegal pesticides.”

Highlighting the importance of cooperation between regulatory authorities and industry players, Géraldine Kutas, head of CropLife Europe, said keeping counterfeit and illegal pesticides out of the European market was key to meeting the objectives of the EU’s flagship food policy, the Farm to Fork Strategy.

“To do this, we need to continue raising awareness for both farmers and the legitimate distribution channel to make sure they reject criminal offerings that jeopardise the sustainable production of food,” she said.

However, Martin Dermine, health and environment policy officer at the Pesticide Action Network (PAN) Europe, pointed out that the use of illegal pesticides is a “common practice” in many European countries.

“The analysis of pesticide residues in food and water streams regularly confirms it. Controls on pesticide use are very limited in the majority of member states and even when a pesticide is banned, it continues to be used,” he said.

“The European Commission should start conditioning Common Agricultural Policy money to the adoption of pesticide-free, agro-ecological practices instead of supporting a highly polluting industrial agriculture model with its deviations,” he urged.