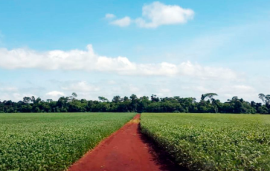 The Institute of Agricultural Biotechnology (INBIO) held a press conference to present its report on the area sown for soybeans, corn and rice during the 2020-2021 agricultural season in the Eastern region of Paraguay.

The INBIO report, which was presented by Federico Pekholtz (Remote Sensing Consultant), highlighted an increase of 6% in the soybean planting area.

During the virtual press conference, Ing. Agr. Héctor Cristaldo (INBIO Director) stressed that performance will be good overall and predicted that production could reach 10 million tons, noting that this will not be a record figure due to the lack of rain during the time of sowing, which delayed the entire agricultural season.

Regarding the price obtained by producers during this agricultural season, he revealed that, although oilseed prices are high, reaching levels not registered for more than 7 years, producers are looking more to future sales, while considering values of less than $US400 per ton.

Finally, the top three is completed by the department of Canindeyú, where 680,031 hectares of the crop were planted, about 11,183 hectares more than in the previous season.

According to the data provided by the Central Bank of Paraguay (BCP) regarding the processing of registered exports of primary products, there was an increase of 24.8% compared to the same period last year, representing about US$880.7 million more in terms of income. The products with the most positive impacts were soybeans, corn and wheat.