Brazil: Stink bugs, whitefly can cause losses of up to 50% in soybeans 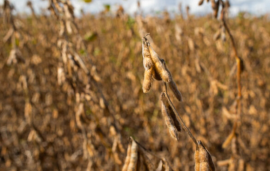 The stink bugs, characterized by the brown and green-bellied stink bugs, and the whitefly are stated by researchers to be the main pests of soybeans today and can cause losses of more than 50% in production.

According to the entomologist, Clerison Perini, stink bugs can cause losses from the formation of vegetables to the harvest of soybeans, which is a critical period for monitoring and controlling these populations. “Even with dry grains and at harvest point, the damage can be high because a single puncture in the grain serves as a gateway for moisture to make the seed unviable. That's what happened in this last harvest, due to frequent rains and the impossibility of harvesting,” emphasized Clerison, a researcher at Proteplan.

Although many insects damage soybeans at the beginning of the crop's development, the entomologist also drew attention to pests that affect the reproductive period. According to him, in addition to the stink bugs, the whitefly causes direct damage, due to feeding by suction of the plant's sap, and indirect damage, due to the formation of sooty mold on the leaf, which reduces the photosynthetic rate, or by the transmission of viruses. “This last damage is often silent and the producer does not notice it in the soybean plants due to the characteristic of some cultivars that they do not express the virus symptom,” he explained.

To help producers fight these pests, Clerison explains that one of the bases of Integrated Pest Management (IPM) is to know the Economic Damage Levels (NDE) of insects and phytophagous mites, to predict the maximum pest density that the producer can support in the field. “With regard to stink bugs and some caterpillars, it is already well studied. However, for the whitefly, there is still no consensus on the potential for loss of productivity in soybean. Thus, some research was started on the NDE of whitefly and an evaluation of infestation levels in different soybean cultivars, seeking to have an average number of whitefly nymphs per leaf that the producer can tolerate without prejudice.”

The producer needs to be aware of caterpillars that cut the plants and/or damage the apical trefoil and bore the stem, with defoliating coleoptera that cuts the leaves and parts of the plant and also with weevils that consume leaves and petioles.

For the agronomist and consultant, Guilherme Ohl, in addition to biotechnologies and chemical insecticides, biological products also serve as tools for integrated pest management. Regarding application, the specialist recommends the use of specific and reliable insecticides, in addition to management strategies that take into account the production system and not just the soybean crop.

Regarding the multiple strategies to combat pests, Clerison explained that although the use of the biological control method is still low, mainly due to commercial unavailability, compared to chemical control, which has numerous products, the growth of the sector, which is around 30% per year, will provide inputs for the producer who is looking for this tool.