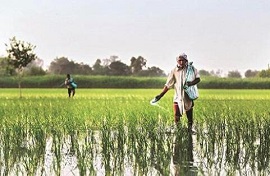 At a time when the government is emphasising on the need for increasing agriculture exports, there is a threat of the $2.6-billion Saudi Arabia and United Arab Emirates (UAE) markets lowering imports from India due to the contravention of quality standards.

Both countries contribute $1.3 billion each to India's $40-billion annual agri exports; out of which, products registered with the Agricultural and Produce Exports Development Authority (Apeda) account for a 50 per cent share.

Apart from that, India exports a huge quantity of agri produce to other countries in the region, making the entire Middle East the largest destination for India's agricultural exports.

The governments of Saudi Arabia and UAE have informed the Indian government about the interception of higher than permissible levels of pesticide residues in agri commodities, particularly in vegetables such as okra and green chillies, among others. Cancellation of imports by these Middle East countries, as threatened, would result in a cascading effect in other countries, including the quality conscious European Union. This might dent the government's aim to boost exports.

"Lots of products imported from India contravened the provisions of the food standards and safety of the Dubai Municipality. Indian exporters exporting food items to UAE are requested to apply for the regulations and provision of the food safety and standard prescribed by UAE and take constructive steps to comply with them and minimise the percentage of rejection, resulting in minimum losses and retaining India's position as the leading food exporter to the UAE," said U K Vats, general manager, Apeda.

The government has been encouraging exports of agricultural produce by incentivising a part of the value of exportable goods. In fact, it aims to double India's farm exports by 2022.

India is the top food items exporting country to the UAE, followed by the United Kingdom, the Netherlands, Oman, the United States, Thailand and Italy. India contributes nearly 20 per cent of the UAE's food requirement.

The UAE government has indicated the requirement of labels on food items carrying the brand name, product name and ingredients, etc. The UAE has also asked for health and organic certificates, in case the Indian exporters claim that the products are organic.

"The Kingdom of Saudi Arabia has reported instances of interception of higher than permissible levels of pesticides residues in vegetables. Apeda has issued several advisories to exporters seeking compliance of the quality norms as prescribed by Saudi Arabia. Indian exporters, however, have not taken serious cognisance of these advisories. Saudi Arabia has intimated that if this situation continues, they are going to take strong action in the near future," said Vats.

Considering the sensitivity of the matter, Apeda has requested the National Plant Protection Organisation (NPPO) to grant phytosanitary certificates -- plant passports -- for okra, green chillies and other vegetables exported to Saudi Arabia only on the production of test reports from a laboratory recognised by it. This will ensure compliance to Saudi Arabia's import requirements, Apeda said in an advisory.

Meanwhile, interception of pesticide residues in vegetables above the permissible limit has been reported on several occasions in the past. A number of export consignments of Indian origin have also been rejected.

Apeda has warned that violation of the advisory of importing countries' requirements would be viewed seriously and the onus of financial losses would solely be on the defaulting exporters.
View More