Sales of glyphosate down by nearly a third in Switzerland 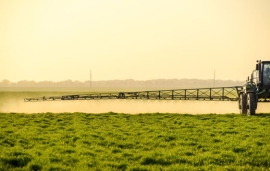 Sales of herbicide glyphosate dropped by 31% in the two years from 2014, according to Switzerland’s Federal Office for Agriculture (FOAG).
In 2014, 296 tonnes of the chemical were sold in Switzerland. By 2016, sales had fallen to 204 tonnes, a 31% fall. FOAG attributes some of this decline to increased mechanical weed removal.
Overall, the sale of substances to protect plants from fungus, weeds and insects remained stable from 2008 to 2016 at around 2,200 tonnes.
While glyphosate sales fell, sales of substances permitted in organic farming such as sulfur, and kaolin rose noticeably.
Since 2008, sales of kaolin have risen 13 fold. Since 2014, sulfur sales have risen 14%.
Sulfur is one of the oldest fungicides and pesticides and is an important substance for organic farming.
Kaolin is a fine clay discovered in China. The word comes from Gaoling, which means high hills in Chinese. It is now produced and used around the world.
View More