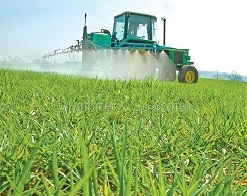 New laws to restrict the use of pesticides in Europe could impact heavily on developing world exports, a leading British expert has warned.

One third of South African exports are to Europe and agriculture is a key economic driver in South Africa, employing more than 6 million people.

But Mr Dyer said: “This trade is now being put at risk by European food retailers placing additional restrictions on how South African food producers grow their crops, in order to meet new EU pesticide rules.”

The EU rules, agreed in Brussels last year, will remove a number of key crop protection products from the market based on their ‘hazardous’ properties.

But Mr Dyer feared the impact would be even farther reaching if the EU rules were taken to their logical conclusion and pesticides banned in Europe were also prohibited from use on food imports. He said exports of wine, citrus fruits, apples, pears and avocados could all be affected.

"South Africa has been identified as a principal development partner for the EU and is earmarked to receive over €1 billion in development aid over the next decade, and yet South African farmers and food producers could face losses in excess of this figure if they can no longer export their products to Europe,” he said.

Defra finished its public consultation on the pesticide regulation earlier this month and the rules will come into force later this year.
View More