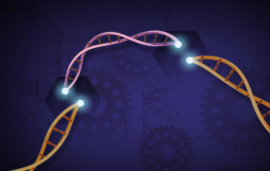 In a new publication in Nature Plants, assistant professor of Plant Science at the University of Maryland Yiping Qi has established a new CRISPR genome engineering system as viable in plants for the first time: CRISPR-Cas12b. CRISPR is often thought of as molecular scissors used for precision breeding to cut DNA so that a certain trait can be removed, replaced, or edited. Most people who know CRISPR are likely thinking of CRISPR-Cas9, the system that started it all. But Qi and his lab are constantly exploring new CRISPR tools that are more effective, efficient, and sophisticated for a variety of applications in crops that can help curb diseases, pests, and the effects of a changing climate. With CRISPR-Cas12b, Qi is presenting a system in plants that is versatile, customizable, and ultimately provides effective gene editing, activation, and repression all in one system.

“This is the first demonstration of this new CRISPR-Cas12b system for plant genome engineering, and we are excited to be able to fill in gaps and improve systems like this through new technology,” says Qi. “We wanted to develop a full package of tools for this system to show how useful it can be, so we focused not only on editing, but on developing gene repression and activation methods.”

It is this complete suite of methods that has ultimately been missing in other CRISPR systems in plants. The two major systems available before this paper in plants were CRISPR-Cas9 and CRISPR-Cas12a. CRISPR-Cas9 is popular for its simplicity and for recognizing very short DNA sequences to make its cuts in the genome, whereas CRISPR-Cas12a recognizes a different DNA targeting sequence and allows for larger staggered cuts in the DNA with additional complexity to customize the system. CRISPR-Cas12b is more similar to CRISPR-Cas12a as the names suggest, but there was never a strong ability to provide gene activation in plants with this system. CRISPR-Cas12b provides greater efficiency for gene activation and the potential for broader targeting sites for gene repression, making it useful in cases where genetic expression of a trait needs to be turned on/up (activation) or off/down (repression).

“When people think of CRISPR, they think of genome editing, but in fact CRISPR is really a complex system that allows you to target, recruit, or promote certain aspects already in the DNA,” says Qi. “You can regulate activation or repression of certain genes by using CRISPR not as a cutting tool, but instead as a binding tool to attract activators or repressors to induce or suppress traits.”

This ability gives CRISPR-Cas12b an edge over CRISPR-Cas12a, particularly when gene activation is the goal. Additionally, the system retains all the positives that were inherent in CRISPR-Cas12a for plants, including the ability to customize cuts and gene regulation across a broad range of applications. In fact, Qi and his lab were even able to repurpose the CRISPR-Cas12b system for multiplexed genome editing, meaning that you can simultaneously target multiple genes in a single step.

“Added complexity allows targeting of more specific or other effectors for gene activation, repression, or even epigenetic changes,” says Qi. “This system is more versatile because we can play with more modifications, more domains, and there are therefore more opportunities to engineer the whole system. Only when you have this kind of hybrid system with more complexity do you get the most robust gene activation and editing capabilities.”

The initial work for CRISPR-Cas12b completed in this paper was conducted in rice, which is already a major global crop. However, Qi and his lab hope to explore more systems to further enhance and improve plant genome engineering, including developing applications to additional crops.

“This type of technology helps increase crop yield and sustainably feed a growing population in a changing world. In the end, we are talking about broad impact and public outreach, because we need to bridge the gap between what researchers are doing and how those impacts affect the world,” stresses Qi.

This work is funded by the National Science Foundation (NSF Award No. IOS-1758745) and the National Institute of Food and Agriculture, United States Department of Agriculture (USDA-NIFA Award No. 2018-33522-28789).