Will more GMO soybeans be planted in 2021? Any time there’s an outlook for lower commodity prices, the question comes up: “What would I plant instead?” On many farms, that’s when the non-GMO side of the soybean sector gets a fresh look. But one thing doesn’t change. Planting non-GMO food-grade or identity preserved (IP) still means having to balance the positives and negatives.

On the plus side, there’s the opportunity for price premiums and higher market demand.

On the negative, the sector still has challenges with lower yields, difficult weed control, and segregation. Put simply, growing non-GMO means walking away from the comparative ease of growing GMO varieties.

After the 1997 Canadian introduction of glyphosate-tolerant soybean technology, non-GMO production quickly changed. Markets for Japan and countries in Europe offered an optimistic out- look buoyed by Canada’s reputation for food safety and regulatory guidelines. In 2000, Statistics Canada figures showed non-GMO soybean production at an all- time high if 2.212 million tonnes (81.8 per cent of the national total) compared to 491,000 of GMO production.

In 2020, Canada’s soybean acres dropped 11.3 per cent as growers cut their cropping plans, largely in response to higher global stocks and huge crops in Brazil and the U.S. 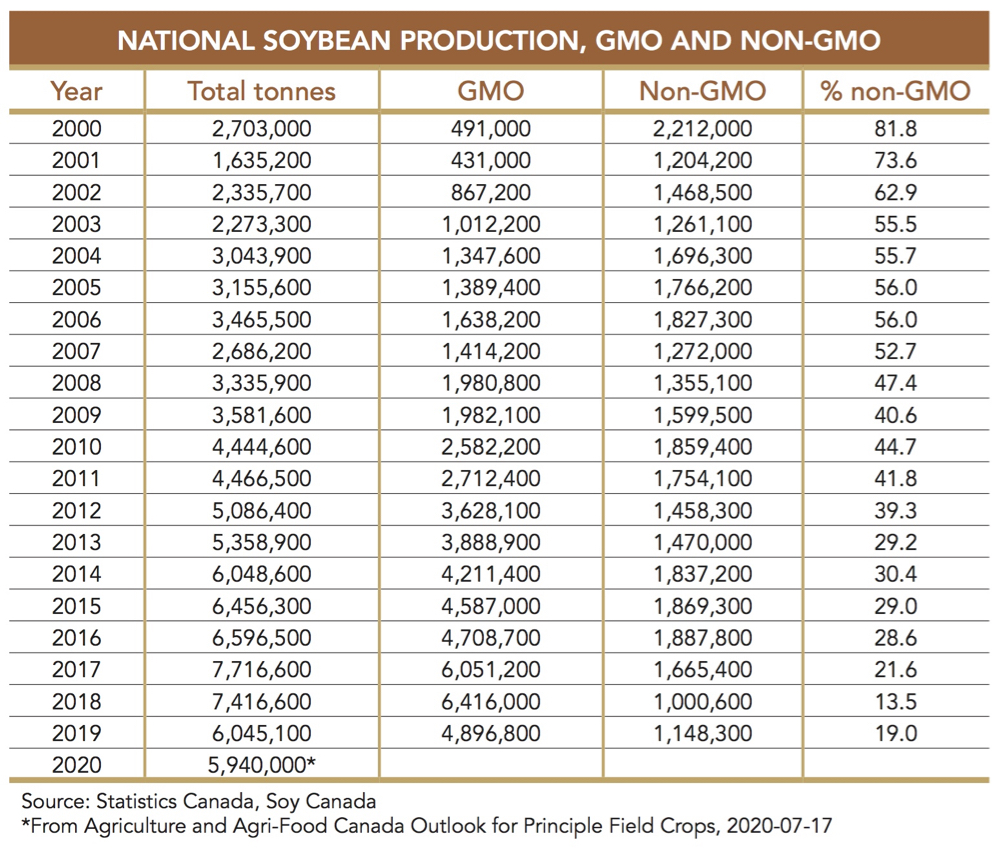 Last spring, there were also rumours in the seed trade that 2020 might turn out to be a non-GMO year. More growers were asking their agronomists about field management, sprayer clean-out and segregation.

Yet the numbers don’t seem to support it. Does it mean the future for IP/food-grade soybeans is in decline?

Maybe, but it depends. Conditions on the farm continue to change. Interesting markets are emerging — like plant-based proteins — and farm managers are becoming younger. They’re looking to maximize the earning power of their operations, and they’re considering any and all courses to improve their bottom lines.

Of course, there is also the contingent of growers who have acquired a lot of non-GMO experience over the years, and who will pencil in a non-GMO crop of soybeans because they usually make money at it, just like they might put some acres into dry beans, malting barley or flax.

“Growers have always been aware of this market opportunity,” says Martin Vanderloo, president of Huron Commodities, based in Clinton, Ont. “They tend to weigh convenience against returns. When the soybean market drops like it has this past year, there tends to be more interest in IP soybean production.”

Vanderloo adds that his company’s agronomists are actively running crop budgets to keep growers informed of the economics of IP versus GMO production. And he also refers to another issue in crop production, i.e. the need to rotate cropping systems in order to reduce the risk of glyphosate resistance.

Vanderloo agrees the younger generation is also having more of an impact. They may be less content to follow tradition, often because they’re carrying more debt and are interested in the returns-per-acre calculation.

The other emerging trend that’s sparking optimism for soybean and other pulses is the move to plant-based proteins. Although some may view it as “another sure thing” that’s destined to wane, a document from January 2020 — “The Plant-Based Protein — Global Market Outlook” — suggests a steady and significant climb in the next seven years. The EU-based report stated plant-based protein had a value of $16.23 billion in 2018 and is forecast to reach $57.1 billion by 2027, with an annual growth rate of 15 per cent.

“Plant-based proteins are being advertised everywhere we look,” says Vanderloo, adding he believes that in the long-term, consumers will come to accept more plant-based proteins in their diets. “This concept includes food safety, traceability, and sustainability as well. This thinking is very big in Europe.”

At the same time, there is the growing anti-chemical sentiment on both sides of the Atlantic, whether growers want to accept it or not. For better or worse, more consumers are standing against the use of any chemicals, in the belief that such a complete departure from their use is how “organic” is defined, a stand that Vanderloo opposes.

“My concern is that many in the media are printing stories which are absolutely not science-based,” he says. “That is a problem. Although there is a place for organic production, it has a larger carbon footprint and is not capable of feeding the masses as our global population increases.”

In a commodity market environment dominated by U.S. overproduction and the impacts of trade actions with China, it might seem an easy option to go the non-GMO route. Yet the short-term outlook is impeded by a reality in which non-GMO soybeans typically offer lower yields and are subject to more stringent production and handling requirements.

When Ron Davidson adds in the Statistics Canada numbers from the past 20 years, plus the shifting relationship between GMO and non-GMO soybeans, he doesn’t see robust growth in the latter sector.

As a representative of Soy Canada, Davidson says it isn’t his role to favour non-GMO over GMO soybeans. That choice is made by producers and consumers. However, the agency actually invests more in promoting and differentiating non-GMO production within the international marketplace.

The other barrier to driving higher non-GMO production is the increasingly multi-functional quality of GMO soybeans. Davidson says soybeans provide a very high-quality protein that, unlike other plant-based proteins, contains all of the essential amino acids and a good range of minerals required in the human diet. In the context of higher preferences for human milk or milk from livestock, fortified soy-based formula is the only plant-based option recommended by Health Canada and the Dieticians of Canada for young children.

“North American consumers are now generally familiar with the broad availability of soy-based foods such as tofu, tempeh, soy milk, soy sauce, edamame and natto,” adds Davidson. “As these products can be derived from either GMO or non-GMO soybeans, the production signal to producers will be dependent upon consumer choice and a willingness to pay a premium for non-GMO products.”

It’s not that Davidson contends that all consumers are unwilling to pay an added premium for soy food items: there is a portion of the population that has the willingness and the financial means to pay an added price for products they prefer.

Whether it’s enough to drive higher production of non-GMO production, though, is another matter. Quebec and Ontario have the infrastructure to handle what’s being grown, year-to-year. Manitoba and Saskatchewan saw considerable hikes in soybean production in 2017, with 2.3 million acres and 850,000 acres, respectively. In 2020, Manitoba seeded 1.1 million while Saskatchewan’s acreage fell to 150,000 in 2019. Neither province is structured for the non-GMO market.

“In recent years, some Canadian soybean exporters have been successful in expanding producer interest in identity-preserved soybeans into Manitoba and Saskatchewan,” says Davidson. “The demand for IP soybeans is typically associated with a requirement for specified minimum protein content, and that is generally lower in growing regions that are cooler and drier.”

Research initiatives that seek higher protein content in cooler and drier climates will support expansion of the growing regions most suitable for the production of identity-preserved soybeans, he adds. Some research suggests that the amino acid balance of soybeans grown in cooler regions may be preferable to that of soybeans produced under higher heat.

One thing that has drastically changed since February 2020 is the effect on the food value chain caused by the COVID- 19 pandemic. Vanderloo contends that there’s a greater tendency to bring production and manufacturing “back home,” and he’s noticed a similar favouritism in other countries.

“This will be a challenge for Canada as we’re a major exporter of many raw materials and commodities,” he adds. “Canada needs to think about value-added and further processing of food products for our own food security as well as opening the possibility of export- ing those value-add or further-processed products that other countries may not be able to produce themselves.”

Food safety, traceability and sustainability are all part of a growing movement, notes Vanderloo, and Canadian farmers need to embrace these opportunities that offer market access before others do. Farmers are already known as the environmental stewards of the land. What’s necessary is the documentation of what they’re doing to qualify and be certified as safe, traceable and sustainable producers of food commodities and products.

Yes, some commodity groups are working with farmers to achieve this kind of model, but it’s still early in the game.

Davidson also echoes others who have called attention to Canada’s outdated regulatory framework, which discourages improvements at many levels. Its unwieldy reliance on plant novel trait (PNT) guidelines and the precautionary principle have created a disincentive for smaller research organizations.

“It’s jeopardizing future Canadian-based research and innovation, jobs, competitiveness and food production in this country,” says Davidson. “Canada’s regulatory framework has evolved from being that of a world leader to a global laggard, and this development has important sustainability, nutritional, food security, economic, trade and job implications.”